Do You Have to Give Up Alcohol to Lose Weight?

Alcohol provides empty calories and also slows down metabolism. However, if you consume it in moderation and stick to a healthy diet with exercise, it doesn’t have to be harmful. 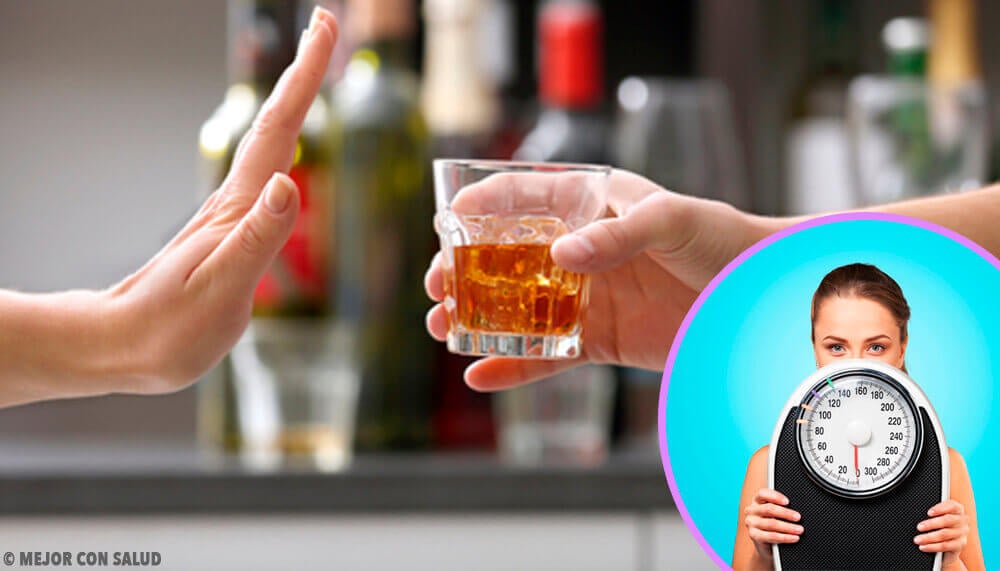 When we want to lose weight, as well as exercising a lot and eating a balanced diet, we’re advised to give up alcohol.

Drinking directly impacts our body’s natural balance and how we look.

However, some doctors suggest that losing weight doesn’t necessarily mean cutting out alcohol completely, as long as it’s in moderation.

Find out more in this article.

People who drink alcohol daily take on between 100 and 200 extra calories.

Among the benefits of giving up this habit, we could mention:

Giving up causes weight loss because:

If, instead, you drink some mineral water or a natural juice with lunch or dinner, you’ll have fewer cravings and choose healthier options.

Without realizing it, alcohol significantly increases calorie intake, even more than food.

Although you may think that this isn’t much, the problem is that we rarely drink only one drink, and instead drink several along with food.

Perhaps you’ve read or heard the phrase “alcohol makes you fat”. This is completely true, since it urges the body to produce more estrogen.

This hormone stimulates the accumulation of fat (especially in women).

4. It slows down the metabolism

When we drink alcohol, the body doesn’t have the capacity to burn fat or properly digest it.

Drinking a lot of alcohol causes dehydration, which results in fatigue. You won’t feel like doing anything other than sleeping or lying on the couch and watching TV.

Don’t forget: Without movement, there is no weight loss.

Alcohol isn’t the root of all evil

In general, it’s common to eat out at least once a week. Between work lunches and dinner with friends, alcohol is never absent. Many people blame it for their excess weight.

However, it isn’t the only “bad guy” in the movie.

Many of us will have heard the expression “beer belly” but, of course, a “beer” isn’t the cause of all our problems.

Excess weight is caused by other bad habits, such as eating a lot of of processed foods, snacking between meals, a lack of exercise, a sedentary lifestyle, etc.

It also depends on the type of alcohol you drink. For example, a small beer has 100 calories.

Imagine a “normal” outing with friends where you drink four beers and some chips. This translates to 1,000 calories. If you do this once a week, you will have gained a kilo (over two pounds) in a month.

However, we should break with the myth that alcohol “fattens”, or, at least not demonize it so much. Moderate consumption benefits us as long as we choose healthier options such as red wine, for example.

The key to losing weight isn’t to stop drinking alcohol from one day to the next, but to maintain a healthy diet and reduce the amount of calories you consume in a day.

The relationship between obesity and alcohol depends on type and quantity.

Accompanying alcohol with really healthy habits can be the secret to not having to give up going out with friends or the pleasure of a drink at dinner.

This means that drinking a glass of wine or a glass of beer up to twice a week will not have significant changes in your weight or health if:

Poor diet and sedentary lifestyle are the main causes of obesity worldwide. The consumption of alcohol is a mixture of both.

Alcoholic beverages have almost the same calories as a soft drink or a chocolate shake. By reducing our metabolism, we take away energy to train or exercise.

Moderate alcohol intake is 1 or 2 glasses of wine or beer per day for men and 1 for women, as long as you follow a healthy diet and exercise 3 times a week.

5 Foods that You Should Avoid if You Want to Lose Weight
We all know how difficult it is to stay in shape or to follow a diet regimen. It might be easier than you think. What you should do if you want to lose weight is following a diet that does not include foods that make you gain weight. Read more »
Link copied!
Interesting Articles
Did you know?
New Year's Traditions Around the World