Do We Need to Consume Sugar? Find Out the Truth

There's a lot of debate regarding whether or not we really need to consume sugar. Find out the truth in this article! 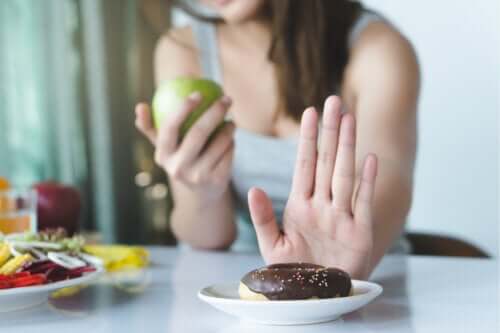 With the rise of ketogenic diets, many people are wondering whether we really need to consume sugar to keep the body functioning. The truth is that experts have offered varying opinions in recent years. In this article, we’re going to tell you everything that science has to say about it.

Before we start, it’s important to note that today’s population tends to consume sugar in large quantities. This is mainly due to the increase in the intake of ultra-processed industrial products. These often have a high content of simple sugars and trans fats to improve the organoleptic characteristics of the final product.

When we talk about sugar, we’re referring to a type of simple carbohydrate that consists mainly of glucose units linked together.

Although these units can form more complex structures, they generally have a high rate of absorption in the intestine. For this reason, they increase the amount of insulin the body produces, which has shown to be harmful in the medium term. Sugars can include the following nutrients:

These are simple sugars. Normally, they consist of a series of glucose molecules linked by simple bonds. Their regular intake contributes to poorer health, as they could affect metabolic health and the risk of gaining excess weight. A study published in Frontiers in Bioscience backs up these claims.

Disaccharides consist of the union of monosaccharides through an o-glycosidic bond. These have a slightly slower absorption speed than the previous ones, although they’re still considered to be simple sugars. For this reason, it’s important to limit their intake as much as possible.

You may also be interested in: The Effects of a Low-Carb Diet on Your Body

Polysaccharides are carbohydrates that consist mainly of glucose, although they form a network of bonds that significantly increase their molecular weight. For this reason, they also fall into the category of complex sugars.

Their speed of absorption decreases and, therefore, the effects they cause in the body vary. These compounds are capable of generating lower peaks in blood glucose levels.

How does the body metabolize sugar?

Carbohydrates reach the small intestine where enzymes break them down into simple units before they’re absorbed. They, then pass into the blood, thus increasing blood sugar and stimulating the secretion of insulin. Insulin is the anabolic hormone that allows the transport of the nutrient into the cells or liver.

If you’re physically active, the sugar reaches the muscle tissues, where your body will convert it into ready-to-use energy. However, if you’re at rest, your body will store it in the form of liver or muscle glycogen.

It’s worth noting that these deposits are limited. When they’re saturated, the body begins to transform sugar into fat at a hepatic level for its later accumulation in adipose tissue.

It’s also important to note that this increase in lipid reserves has shown to be harmful to health, especially when it exceeds certain levels. In this sense, they contribute to inflammatory processes that are promoted which, in many cases, are linked to the development of complex pathologies.

To find out more: Belly Fat: 8 Possible Reasons Why You Accumulate It

What does the body use glucose for after we consume sugar?

As we mentioned, the main use of glucose in the body is to produce energy. It’s the preferred fuel for the anaerobic routes of metabolism and can also be introduced into those of an aerobic nature.

However, the latter also accept fatty acids or even glucose that doesn’t come from sugar. The latter forms through physiological processes involving fatty acids and proteins.

It’s important to note that glucose functions as brain fuel. However, contrary to common belief up until recently, other compounds can perform this function perfectly. An example of these would be the ketone bodies that we produce during ketosis.

Is it really necessary to consume sugar?

The truth is that everything seems to indicate that sugar isn’t necessary for the diet of sedentary people. Even in the case of sportsmen and women, its intake is controversial. The body can function perfectly in situations of low carbohydrate intake. In fact, this type of diet can be beneficial to the body.


Nevertheless, a low-sugar diet with the presence of complex carbohydrates can be considered. This would require a significant reduction in the consumption of sweets and ultra-processed foods and an increase in the consumption of fresh foods. Such a situation would fall within the theory of the middle ground and would be advantageous for the functioning of the body.

As we’ve discovered, sugar is a nutrient that brings little value to the diet. In fact, most experts advocate the need to reduce its consumption in sedentary subjects. Even many athletes are considering the option of avoiding sugar consumption. This could increase metabolic flexibility and performance in the medium term.

What’s clear is that reducing sugar intake through diet generates a positive impact on health. But does this mean that carbohydrates need to be completely withdrawn?

Those with a low glycemic index, i.e. those that are complex, can be consumed. These are mainly found in tubers and legumes.

Myths About Sugar Intake
White sugar is important in any diet. We find it in the table sugar that we use to sweeten other foods, but just how much should we intake? Read more »
Link copied!
Interesting Articles
Nutrition
White, Brown, and Muscovado Sugar: Similarities and Differences