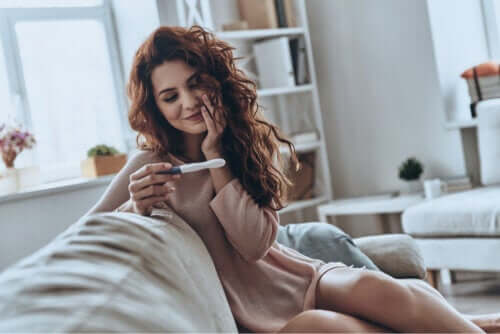 A pregnancy test works by detecting the human chorionic gonadotropin (hCG) hormone, which the body produces when a fertilized egg implants into the uterine lining during early pregnancy. Home pregnancy tests should be done with the first urine of the day. However, doctors recommend getting a blood test to confirm the pregnancy.

Blood tests are done in a doctor’s office and detect small amounts of the hCG hormone. Thus, they’re able to detect a pregnancy in its early stages. Generally, women go see a doctor after they get a test at home.

Home pregnancy tests are the most popular and easiest to do. They’re usually cheap, can be bought at any pharmacy, and women can self-administer them. But how accurate are they?

A woman takes a pregnancy test when she suspects she may be pregnant. Beyond missing a period, she must feel some of the early symptoms, either for a few days or one or more consecutive months.

The truth is that, according to the National Institutes of Health, missed periods can have a variety of causes, including taking birth control pills, conditions such as diabetes and polycystic ovary syndrome, eating disorders, and certain medications. Now, what are the early signs of pregnancy?

These traditional symptoms can begin at any time between two and eight weeks of pregnancy. This happens due to the effects of human chorionic gonadotropin (hCG). However, it doesn’t always occur, and some women tend to enjoy vomit-free pregnancies.

In fact, according to a poll of early pregnancy symptoms by the American Pregnancy Association, 25% of the surveyed women indicated that nausea was the first sign of pregnancy.

This is known as implantation bleeding. It occurs when the embryo implants into the uterus between six and 12 days after conception. Some women experience spotting and cramps. Nevertheless, only 3% of the women identified implantation bleeding as their first sign of pregnancy.

Get a home pregnancy test if you experience breast changes

Higher levels of hormones and changes in breast structure cause nipple and breast tenderness from three to four weeks after conception. About 17% of women reported that a change in their breasts was the initial symptom of pregnancy.

You should also read: Pregnancy in Summer: How to Cope with High Temperatures

Due to increased progesterone levels and the body’s effort to support the pregnancy, pregnant women state usually feel tired during early pregnancy. This symptom disappears in the second trimester and can return near the due date.

Headaches are common during the first trimester of pregnancy. Its main causes are hormones, stress, and strain on the body from carrying extra weight.

You can buy a home pregnancy test at any pharmacy. These urine tests include a test strip or a collection container, it depends on the brand.

To take a home pregnancy test, follow these steps:

There have been cases of false-positives. In other words, the test said that the woman was pregnant even though she wasn’t. This can happen if she miscarried shortly after the fertilized egg attached to the lining of the uterus or if she takes a pregnancy test shortly after undergoing fertility treatment.

Home pregnancy tests can give incorrect results due to ectopic pregnancy, menopause, or ovarian problems.

You should also read: Causes of Abdominal Pain During Pregnancy

Notwithstanding the above, if the test states that you’re pregnant, make an appointment with your doctor to confirm the results with a blood test or, otherwise, to discover what’s going on in your body.

If you don’t have access to any of these scientifically proven tests, according to anecdotal data from popular culture, other tests would work, as they detect the reaction of human chorionic gonadotropin (hCG) with the compounds. These tests aren’t scientifically proven.

Collect your urine in a plastic container. Then, mix shampoo and water in another container. This will result in a soapy mixture, which you should mix with your urine.

If the mixture foams, it’s supposed to be positive. People claim it works because hCG would react with the shampoo and make it foam. Nevertheless, it has yet to be proven by science.

Place a tablespoon of sugar in a plastic container and then pour a tablespoon of urine over it. If the sugar clumps up, the result is positive. On the other hand, if it dissolves quickly, the result is negative. People say it works because the pregnancy hormone doesn’t allow sugar to dissolve. Nevertheless, there’s no scientific evidence on the matter.

To use the toothpaste pregnancy test, add toothpaste to a container and then pee inside it. The toothpaste should be white, because the idea is to see if it turns blue. If it does, the result is positive. Popular culture says it works because toothpaste changes color when it comes into contact with hCG.

Can you trust the results of home pregnancy tests?

Definitely. The results of home pregnancy tests are generally accurate. Only in certain situations, such as those we mentioned above, do false-positives occur.

On the contrary, the last tests we mentioned in this article are anecdotal in nature. Science only supports the effectiveness of home pregnancy tests and blood tests.

If you have any of the early pregnancy symptoms, it’s best to take a test to find out if you’re pregnant or not. And, of course, go see your trusted doctor.

What Does An Ectopic Pregnancy Involve?
It's important to know the early symptoms of ectopic pregnancy so that you can consult with your doctor if necessary. Find out more. Read more »
Link copied!
Interesting Articles
Pregnancy
How to Recognize Postpartum Depression and Treat it