Diseases that Can Hide Behind Indigestion

Because it can conceal other diseases, if you often suffer from indigestion it's really important to consult your doctor to run some tests and rule out any possible complications. 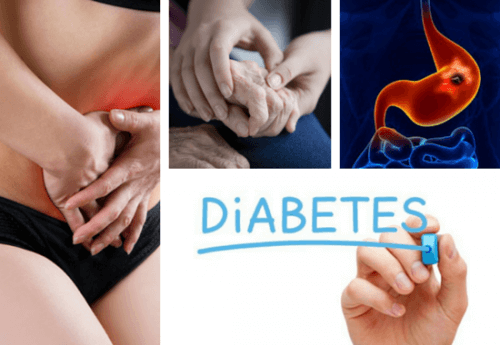 Indigestion or stomach discomfort is a disorder that generally occurs when a person eats too much, too quickly or eats foods to which they’re intolerant.

It manifests itself through discomfort in the upper abdomen and is characterized by a sensation of burning, heaviness and pain.

In most cases, the problem appears suddenly and is often relieved with simple remedies and a healthy diet. However, some people may start to suffer from chronic indigestion, experiencing symptoms more frequently and with greater intensity.

When this occurs, it’s really important to pay attention to the warning signs and then consult your doctor to determine their cause.

Sometimes, another disease can be hiding behind indigestion, and that can have a lot to do with the stomach.

For this reason, it’s really important to pay attention to the recurring symptoms and learn about the type of disorders that can hide behind the discomfort.

Ulcers can hide behind indigestion

Ulcers are sores that form in the mucous membrane that covers the intestines and stomach.

There are several things that can trigger this disorder like:

When they’re small, they’re often imperceptible. However, they’ll require treatment as they can eventually cause severe bleeding.

This is one of the gastrointestinal ailments most associated with frequent indigestion due to the symptoms it causes.

It occurs when the lining of the stomach becomes irritated or inflamed and it can be either acute or chronic.

The symptoms of gastritis include:

Its possible causes include, among others:

Although common indigestion doesn’t indicate the presence of this disease, in some cases its symptoms can be the first warning sign.

A tumor will almost always begin to develop in the mucous membranes of the intestine. As it grows, it causes other symptoms like vomiting blood, unexplained weight loss, and fatigue, among others.

The European Oncological Society warns that men are more likely to develop this disease than women and the risk increases after the age of 60.

Its possible causes include:

This is a disorder of the thyroid gland that mainly affects women, especially those over age 50. It’s responsible for a reduction in thyroid hormones, which are essential for metabolic function, circulation, and digestion.

This explains why problems with digestion cease upon discovering that their cause is due to changes in the thyroid.

The stomach symptoms are often accompanied by a sudden increase in weight, fatigue, anxiety and, in extreme cases, memory loss and cardiac insufficiency.

When the disease affects the peripheral nerves, then the digestive tract can’t receive signals from the brain. Or, alternatively, it doesn’t receive them properly and it ends up malfunctioning.

The increase in blood sugar has a lot to do with several gastrointestinal disorders. This is because it increases the workload on gastric substances that can alter movements in the digestive tract, preventing its contents from moving through the tract properly.

In fact, 50% of people diagnosed with diabetes have recurring problems with indigestion.

Inflammation of the gallbladder

Cholecystitis or inflammation of the gallbladder is characterized by intense abdominal pain that can extend into the back or under the right shoulder blade.

This condition occurs when bile remains trapped in the gallbladder. This is almost always due to a blockage by a gallstone that prevents it from flowing out into the small intestine.

As the bile accumulates behind the blockage, it then causes irritation and pressure in the gallbladder, leading to inflammation and even infection.

If the abdominal pain and other symptoms of indigestion are really intense, then it’s really important to immediately consult your doctor because, if ignored, it can become chronic.

5 Plant-Based Teas for Fighting Indigestion
Have you ever tried one  of these teas for fighting indigestion? Indigestion, also known as dyspepsia, refers to a group of symptoms that occur in the upper-part of the abdomen.  Read more »
Link copied!
Interesting Articles
Did you know?
Why Do We Have Armpit Hair?