Diabetes is related to macular edema, cataracts, and diabetic retinopathy, among other alterations that affect vision. Keep reading to discover more about how diabetes affects eyesight. 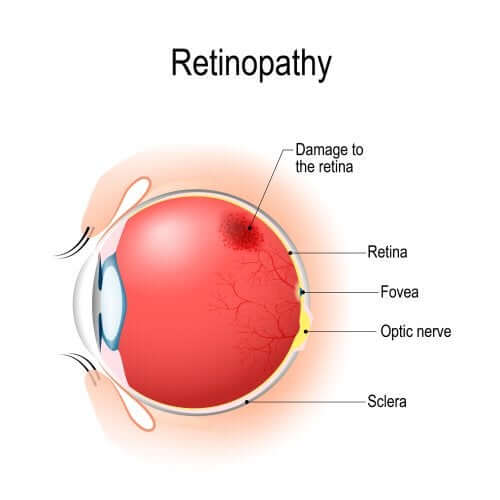 Diabetes is a disease which, unfortunately, can have repercussions throughout our bodies. This includes the sense of sight, which diabetes can impact significantly. Continue reading to discover more on how diabetes affects eyesight.

Diabetes is a chronic disease in which our body is unable to produce or use insulin. Insulin is the ‘key’ that allows glucose to pass from the blood into the cells. When this doesn’t happen, glucose increases its concentration in the blood.

According to the World Health Organization, there are about 422 million diabetics worldwide. In fact, experts believe that, by 2030, diabetes will be the seventh leading cause of death.

The incidence continues to rise because of our inadequate lifestyle. Diet and a sedentary life play a very important role in the development of this pathology, although other factors, such as genetics, also play a role.

According to estimates, around 15 % of type 1 diabetics and almost 40 % of type 2 diabetics suffer from diabetic retinopathy. It’s a complication that occurs in the eyes and leads to progressive loss of vision. In this article, we’ll explain how diabetes affects your eyesight.

How does diabetes affect your eyesight?

Diabetes, as we’ve already mentioned, brings with it an increase in blood glucose levels. This, at certain times, need not cause any damage to eyesight.

However, when diabetes isn’t well controlled and glucose stays high for a long time, damage can occur to blood vessels throughout the body. In fact, this often occurs in people who don’t even know they have diabetes and, therefore, don’t control it.

At first, what happens is that glucose leaks out into the tissues–which is edema. This means that any area swells due to the accumulation of this liquid.

Poorly controlled diabetes also stimulates the formation of new blood vessels in the eye. These vessels are weak, so they have a tendency to break and bleed. They often form around the retina, which is one of the causes of impaired vision.

It’s also true that diabetes can cause pressure to increase inside the eye. All of these situations (increased pressure, creation of weak vessels, and edema) eventually lead to impaired vision.

The eye diseases mainly related to diabetes are the following:

We’ll explain what each one of them consists of.

Diabetic retinopathy involves damage to the retina, which is the light-sensitive tissue in the eye that allows vision. It’s a progressive pathology in which, at first, small areas of inflammation appear in the blood vessels that supply blood to the retina.

As time goes by, these vessels become obstructed and the blood flow to this area is reduced. In the absence of oxygenated blood, the body causes new blood vessels to be created in order to nourish the retina.

The problem is that the new vessels that are created are weak and have a high tendency to break. When this happens, the presence of blood in that area causes vision to be altered, as it prevents the retina from being in proper condition.

The most typical symptom is blurred vision or continuous spotting. In addition, vision is gradually lost and there are even areas where it’s lost completely.

Cataracts due to diabetes

Cataracts consist of the crystalline lens, which is that transparent lens in the eye that allows light rays to pass through correctly, becoming opaque and not allowing light to pass through. This happens because the lens takes excess glucose from the body and transforms it into sorbitol, a substance which, when it accumulates in the lens, makes it opaque.

Macular edema due to diabetes

The macula is the part of the eye that allows us to see detail and is also responsible for central vision. Macular edema consists of an accumulation of fluid around the macula due to diabetes. Because of this, the vision process can’t be carried out correctly either.

There are a number of ways in which diabetes affects eyesight, resulting in various eye disorders. For this reason, it’s important to take care of yourself and go to the doctor if you have any questions. It’s necessary to keep a strict control of your glucose levels to avoid all these situations.