Different Antihistamines and Their Uses

Today we're going to talk about different antihistamines and their uses. For example, they treat allergies and can help prevent vomiting. 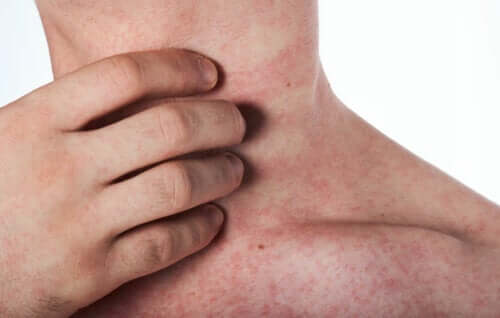 Antihistamines are medications that are used to reduce or eliminate the effects of allergies. To do this, they block the receptors that histamine binds to during allergic reactions. In today’s article, we’ll tell you about different antihistamines and their uses.

Histamine, as you’ll see later, is a substance that the body releases when it’s experiencing an allergic reaction.

Since the discovery of antihistamines (pyrilamine and diphenhydramine) in the 1930s and 1940s, scientists have developed hundreds of molecules with antihistamine properties. In addition, this medication has become very popular in recent years.

In addition to treating allergies, there are certain antihistamines that can help prevent vomiting, vertigo or inducing sleep in patients with insomnia.

Histamine and its receptors

Histamine is a chemical that participates in and is involved in many processes that occur in cells. Among these processes, its role in allergic reactions, inflammation, the secretion of stomach acid and the transmission of nerve impulses stands out.

When playing a role in these processes, it binds to a series of receptors that are distributed throughout the body.

Then, when histamine binds to one of these structures, the body activates mechanisms and releases substances that will activate and bind to other structures. This triggers a physiological reaction.

The reactions that it triggers will depend on what it binds to. These are some of the receptors that histamine binds to:

Different antihistamines and their uses

These types of antihistamines are able to easily cross the blood-brain barrier of the brain. That barrier is a kind of membrane that protects the brain. As a result of crossing it, and managing to bind to the receptors in that organ, the antihistamine triggers quite intense sedative effects.

In addition, they also have other properties such as antiemetics and anti-kinetosides. The sedative and anticholinergic effects of these drugs cause these actions.

Some drugs that are in this group of medications are:

Second-generation H1 antihistamines are recommended for H1 receptors that aren’t found in the brain. This is because scientists eliminated the parts of its chemical structure that allows it to cross this barrier with ease. Therefore, they’re not capable of crossing the blood-brain barrier.

As a result, they trigger fewer adverse side effects. For example, they cause less sedation and less anticholinergic effects. Some examples of these medications are:

As you can see, doctors usually prescribe antihistamines to treat allergies. However, they can also help prevent vomiting or to induce sleep in patients with insomnia.

Now that you’ve read about the different antihistamines and their uses, you should talk to your doctor. They will be able to tell you which antihistamine is best for your personal situation. After that, it’s important to always follow the instructions they give you.

Causes of Puffy Eyelids and Treatments
Surely you've had puffy eyelids at some point in your life and although it's quite common, illness could be one of the causes though. Read more »
Link copied!
Interesting Articles
Medicines
Remifentanil Opioid: Dosage and Precautions

Remifentanil opioid is a drug that belongs to the opioid family and has short-lasting analgesic and sedative properties. Therefore, doctors…

Medicines
Corticophobia or the Fear of Corticosteroids

Corticophobia is the name given to the fear of corticosteroids. Corticosteroids are drugs that help regulate the response of our…