Diagnosis of Epilepsy in Childhood and its Causes

Epilepsy in childhood is a serious disease. In fact, it's a chronic severe condition that considerably alters the lives of those who have it and those of their families. 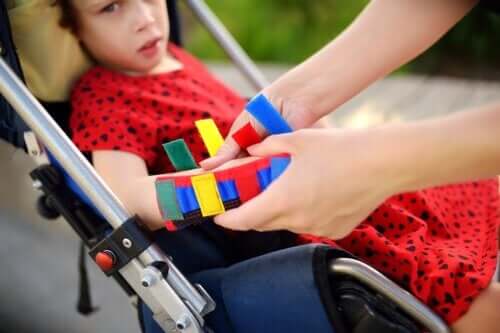 Epilepsy in childhood considerably alters a child’s quality of life. In fact, it doesn’t only affect their life, but also those of their entire family. This is because everyone around them must be involved in their care, which typically involves distributing medications and looking after habits that could be harmful to the patient.

This condition is a neuronal transmission disorder in which many nerve cells perform electrical discharges at the same time. Its types and classification depend on the location of the electrical activity.

Keep reading to review its causes and detection methods.

Prevalence and classification of epilepsy in childhood

The data collected by the Child Neurology Foundation establish that about 40% of all children with diagnosed epilepsy carry the disease but have no seizures. This is important for diagnostic differentiation, as these aren’t the samewhich in comes to treatment.

Thus, a child can have seizures without being epileptic. Therefore, complementary methods will be carried out as needed to establish the cause of a seizure. This is because the disorder could be due to another neurological or vascular cause

We also know that about 20% of epileptic children also have an intellectual disability. This deeply affects the schooling of infants with the disorder as they don’t just have to deal with their epileptic seizures, but also fall behind in their education.

Not all childhood epilepsies are the same, though. According to the international classification, some begin in the front of the brain and others on the sides. Also, there may be seizures or not along with other symptoms such as loss of consciousness or completely conscious. For example, the attacks can be generalized or focused on a limb even within those convulsions.

Causes and risk factors of epilepsy in childhood

Rather than establishing an origin of epilepsy in childhood, it’s best to understand there are risk factors and possible causal situations.

Scientists don’t fully understand the intrinsic mechanism of neuronal firing. However, there are records of contexts that promote the disorder.

The greatest risk within the age of infancy is at an early age as febrile seizures can be confused with epileptic episodes up till the age of 4. The insight of neurologists and pediatricians is critical at this point.

Genetics and family history are also important here. A child is more likely to be epileptic when their parents or grandparents are, as well. In fact, researchers have classified some genes as triggers, although they must always be stimulated by external factors that determine their expression. This means that hereditary carriage won’t always lead to symptoms.

The role of the brain and vascular system

Brain and meninges infections are another cause of epilepsy in childhood. Oftentimes, they don’t occur at the same time as the acute picture, but as a consequence and sequel of encephalitis. This could happen several months later, or maybe even years.

Similarly, head injuries can lead to epileptic sequelae. This is of particular concern in contact sports such as football. A child can recover quickly from a head blow and regain full consciousness but might be diagnosed with epilepsy later on.

Finally, vascular diseases form another causal group. In this case, we’re referring to alterations in the brain circulation, such as arteriovenous malformations or cerebrovascular accidents.

These disorders aren’t as common in children as in adults, but should be suspected if there are indicative symptoms such as seizures or impaired limb mobility.

Also, there are special considerations for prenatal conditions. This is because a mother can pass down toxins to her fetus during gestation and these would affect the baby’s neuronal development. For example, tobacco and alcohol are two drugs that cause syndromes in the fetus by crossing the placenta and eventually alter electrical transmission.

The suspicion of this condition in a child usually begins after the symptoms manifest. In general, the first indication is a seizure that has nothing to do with a fever. From there, a series of complementary methods begin, guided by the pediatrician and the neurologist.

These are the most important tests:

The electroencephalogram is a study that measures the electrical activity of the brain. A lab technician places electrodes to record neuronal transmission on a line from outside the body. This record is deciphered by specialists to find out if there are abnormal downloads. It doesn’t need to be done during a seizure.

A computerized axial tomography (CT scan) of the brain is capable of detecting abnormalities in the structures of the skull that could cause seizures. For instance, this may includes a tumor, increased pressure in the cerebrospinal fluid, or an arteriovenous malformation.

Just like CT scans, magnetic resonance imaging is a complement to observe other softer structures.

This method has recently gained ground as a complementary method for various pathologies, including childhood epilepsy.

It’s possible to see this activity in the form of colors on a CT or MRI scan by injecting a metabolic substance into the patient. This is because the cells to be studied absorb it. Thus, it could detect tumors or neuronal areas with high activity.

When in doubt, consult your pediatrician

Epilepsy in childhood isn’t a disease one can ignore. The sooner you establish means of treatment and prevention, the better the quality of life for a child and their family. Suspecting it may be worrisome, but consult your doctor for immediate evaluation if a seizure does occur.

Treatments vary and have changed over the years. Currently, there are currently more specific diagnostic tools with higher sensitivity. Follow-up and rehabilitation protocols are also more accessible.

Epileptic Seizure: What it Is and How to Respond
In our society, witnessing an epileptic seizure is somewhat traumatic for many. Read this article to learn more about them! Read more »
Link copied!
Interesting Articles
Illnesses
Excessive Appetite: What Are Its Causes?