Diabulimia, a newly created media term for diabetes and bulimia, contains the risk factors of both a major endocrine disease and an eating disorder. 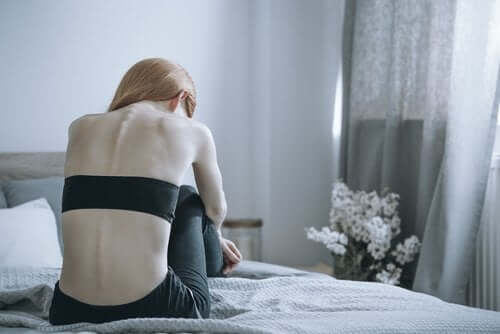 What happens when you mix an eating disorder with a hormonal deficit? The consequences are rather devastating. Such is the case with diabulimia.

But first, what exactly is diabulimia?

Well, it’s a relatively recent disease caused by the combination of two diseases: insulin-dependent diabetes and bulimia. Unfortunately, both are equally dangerous.

What is the role of diabetes in diabulimia?

In the case at hand, we’re going to refer to type I diabetes, the kind that requires exogenous insulin contributions because a person’s pancreas can’t synthesize the necessary amount.

Thus, the lack of insulin is an important factor in the weight loss of these patients. This is because insulin is necessary for bringing glucose molecules to the cells for their proper functioning. So, when there’s no insulin, the sugar remains in the bloodstream until it goes away. The kidneys usually take care of it, but it leads to the kind of weight loss that’s sometimes extreme.

Under normal conditions, young patients with type I diabetes begin to regain their weight. That is, after diagnosis and chronic insulin treatment accompanied by highly regulated feedings. However, a person with diabulimia takes advantage of the action of the insulin in their metabolism to maintain an excessively low weight instead of recovering their good state of health and optimal weight.

You may be interested in: Why is a ketogenic diet good for you?

Diabulimia can appear in both genders. However, most patients are females. The type of person with diabulimia usually has the following characteristics:

So, a person with bulimia who also has type I diabetes begins to replace binge eating, subsequent vomiting and excessive exercise with the use of insulin to lose weight. They inject insufficient doses and these sometimes produce hyperglycemic comas. The same that are rather serious episodes that could end their lives. However, the desire to be thin, sickly thin, is stronger. This perverse use of insulin begins as a kind of game in which they’re entangled without being able to leave as their symptoms progress.

As you can imagine, there are countless complications to this dangerous disease. Here are just some of them:

As you can see, the prognosis of this type of patient is very bleak.

Factors that could indicate diabulimia

Many authors recommend that the family and medical environment of patients with type I diabetes monitor certain factors, especially those that may lead to suspicion of an eating disorder. Among them:

Diabulimia is a disease that’s rather difficult to diagnose and often still unknown by non-specialized medical staff. Its prognosis is very serious, so you must pay attention in order to make an early diagnosis that allows for timely treatment.

This treatment of endocrine disease with involvement of the emotional and psychic sphere is complex. Therefore, it requires the collaboration of a multidisciplinary team such as:

All professionals involved must maintain a fluid communication channel between them. This way, they can adapt their medical and psychological treatments. Also, it’s important to communicate well with the family to decide what’s best for the ill person.

In conclusion, diabulimia is more than an eating disorder and much more than insulin-dependent diabetes. If you suspect that you or a loved one may suffer from this order, seek medical assistance immediately.

How to Improve Your Diet if You Suffer from Diabetes
Do you suffer from diabetes and want to change your diet to avoid health problems? In this article, discover the best tips. Read more »
Link copied!
Interesting Articles
Illnesses
Risk Factors for Mouth Cancer