Diabetes in Children and Adolescents

Diabetes in children and adolescents is usually a genetic condition, but it's also related to being overweight and childhood obesity. In this article, we'll tell you all you need to know. 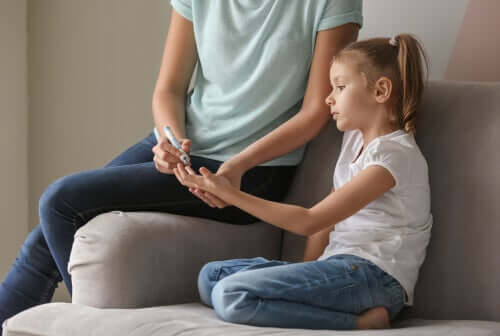 Diabetes in children and adolescents is a problem that’s becoming an increasingly bigger burden on our society. Diabetes mellitus is an illness in which the body can’t produce or use insulin; insulin is the key that allows the glucose to enter the cells.

When this happens, the glucose continues to circulate in the blood. These high concentrations of glucose end up damaging the tissues. It’s also important for the cells to obtain energy. Because of that, diabetes can be a serious illness.

There are two types of diabetes: type 1 and type 2. Over the last few years, we’ve seen an increase in the number of cases. This fact is especially related to our lifestyles and the increase in obesity cases.

In reality, diabetes in children and adolescents is practically the same as in adults on a symptomatic level. However, there are certain differences in how and why it develops. In the following sections, we’ll explain everything you need to know about it.

What causes diabetes in children and adolescents?

As we’ve already mentioned, in general, there are two types of diabetes. Type 1 diabetes is where the pancreas doesn’t produce insulin, whereas in type 2 diabetes the individual’s organic tissue resists the insulin, so it’s unable to function correctly.

This type develops because the cells in the immune system attack the cells that produce insulin. The latter are found in the pancreas. When this happens, the body can’t make the insulin it needs, as KidsHealth explains.

This is a chronic illness. In fact, it’s one of the most common chronic illnesses in children. Type 1 diabetes usually appears due to genetic reasons. Specialists believe that there may be a large genetic component in this; if a parent has diabetes, it’s much more likely that the child will suffer from it too.

Diabetes in children and adolescents of this kind develops because the body creates a resistance to insulin. It’s different from type 1 in that the pancreas continues to produce insulin. This kind is associated with being overweight and childhood obesity.

The relationship between these is complex. To summarize, as a study published in The Spanish Association of Pediatrics (Anales de Pediatría) states that when an individual is overweight, their pancreas needs to produce more insulin in order to transport the glucose to the cells. This results in the cells losing sensitivity to this molecule and developing resistance.

You may also be interested in: Nutrition and Management of Type 2 Diabetes: Recommendations and More

What complications does diabetes in children and adolescents produce?

Diabetes in children and adolescents can be more complicated than it is in adults, as an investigation published in The Spanish Association of Pediatrics suggests. On a physical level, the individual’s risk of suffering other illnesses throughout their life notably increases. For example, type 1 diabetes is associated with a higher risk of the individual suffering from autoimmune illnesses.

In a similar vein, diabetes is related to cardiovascular illnesses, weight imbalances, and of course, acute complications. Of these, the treatment or diabetic ketoacidosis-induced hypoglycemic attacks stand out.

However, the most complicated aspect of diabetes in children and adolescents is the physiological complex. Suffering from this illness causes a change in the child’s social life and self-esteem, mainly because the insulin treatment causes them to gain weight.

Scientists estimate that almost half of children diagnosed with diabetes have problems with anxiety or depression. This is because from when they are young, these children are subjected to significant stress about controlling things, be it their diet or treatment, meaning they aren’t able to live a typical carefree childhood.

Additionally, body image is hugely important at that age. For that reason, it’s necessary to help these children and adolescents work on their self-esteem. They must learn to accept themselves and understand the complications that this illness poses.

Keep reading: Having an Early Dinner Could Help You Lose Weight and Prevent Diabetes

Diabetes in children and adolescents…

In definitive terms, diabetes in children and adolescents is practically the same as it is in adults. At those ages, the majority of cases are due to genetic causes. However, with the increase of overweight and obese children, the number of cases of type 2 diabetes has increased.

Likewise, it’s important to know that, although this is a physical illness, at this stage of life diabetes can bring a lot of self-esteem and mood problems. For that reason, those affected may need psychological support as well.

Dumping Syndrome: What Is It?
A large number of people that have had gastric surgery develop dumping syndrome. However, very few cases become complicated. Read more »
Link copied!
Interesting Articles
Illnesses
Do You Know about the Genetic Basis of Cancer?