Spaghetti carbonara is a staple dish for all pasta lovers. If you're one of them, you should know how to make it perfectly. 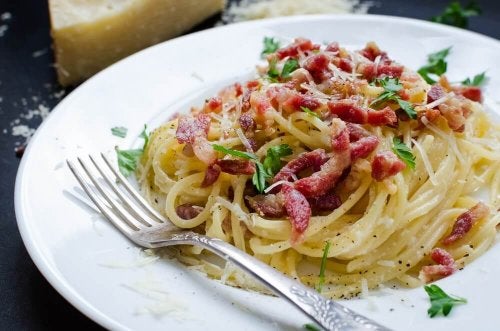 Spaghetti carbonara is a typical Italian dish. It’s especially typical in the central region of Lazio, where the capital of Rome is located.

Although there are several hypothesis about how this dish got its name, the most common theory has to do with the black color of pepper. Black pepper has a similar color to that of charcoal, so when pepper is added to this pasta, it’s like little flecks of charcoal are being added.

There are tons of different recipes for spaghetti carbonara. However, the vast majority are very different from the traditional version. You may be surprised to hear that the original version doesn’t have cream, garlic or onions. The recipes that usually call for these ingredients are Spanish or American.

However, today we’re going to show you the traditional recipe and its main ingredient is bacon.

Discover: How to Make a Creamier Pasta Dish without Cream or Cheese

If you don’t happen to have both types of cheese that we mentioned in the traditional recipe (Parmesan and pecorino), you can just use Parmesan or any other type of semi-cured cheese. That way, you won’t drastically change the flavor of the dish.

Also, there are some people who like to use the whole egg when making the sauce. Thus, it’s not mandatory to get rid of the egg whites. Each person will have their own technique according to his preferences.

However, the most important thing is to try to do without the dairy products in combination with the raw eggs. This will keep the dish from being too heavy on your stomach. Also, to avoid food poisoning, you should eat the dish the same day that you made it.

Lastly, it’s important to remember that the traditional spaghetti carbonara is made with cured pork meat instead of bacon. However, bacon has become a very common ingredient in the American version. Finally, we don’t recommend using the slices of bacon that you can find at the supermarket. Even though they taste great, they don’t have the same density as the cubes you can cut up yourself at home.

A lentil and avocado tarte is an ideal recipe for those who wish to follow a vegan or vegetarian diet.…