Cryoablation has been shown to be effective in treating early tumors. While we still can’t say that it will cure cancer, it may help slow its progression. 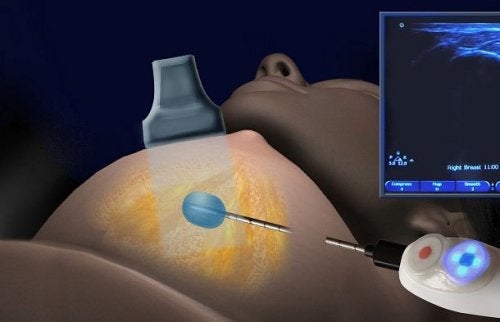 Talking about cryoablation and the idea of “freezing” a tumor to stop cancerous activity could very well seem to be something out of science fiction.

The results we’re seeing today, however, are as hopeful as they are positive.

This is both a straightforward approach and a sophisticated one. A trained radiologist only needs to insert a small needle probe through the skin of the chest.

Once there, the primary tumors and any potential new growths are identified and then frozen.

It’s not just a new medical strategy for treating breast cancer. Cryoablation has also become a good option for lung or prostate cancer.

This surgery is more precise and increases the life expectancy of the patient.

It’s a new treatment in the field of medicine that’s worth learning a little more about.

We’ll start by clarifying something important. Cryoablation does not cure cancer. However, what you will see is the following:

In addition to that, cryoablation does not prevent the patient from undergoing other, more aggressive treatments like chemotherapy or radiation either before or after.

This approach generally offers positive results when applied during the early stages of cancer. In its more advanced stages, a doctor will have to decide what strategies to pursue.

Let’s take a look at some more information.

See also Is cancer hereditary? What you need to know

Cryoablation: a new approach for the treatment of tumors

The first tests in humans for this technique were performed 13 years ago. The so-called “Patient 0” was Laura Ross-Paul, a woman from Oregon who was diagnosed with breast cancer in the first stage.

The technique was quick and effective in spite of the fact that it left a mark. It was a novel intervention that in fact saved her life. Let’s see what it consists of:

This treatment takes a little more than half an hour

This is no doubt a very hopeful finding, but for high success rates with this disease the treatment must be carried out in the early stages.

With cryoablation, patients don’t have to be admitted to an operating room. The intervention takes a little more than half an hour and can be performed while the patient is awake, without more invasive treatment.

Discover the secret of the cancerless village

As we mentioned in the beginning, cryoablation is being applied to other types of cancer.

Many of the studies that have been carried out to explore its utility, such as one published in ScienceDaily, show that this therapy manages to stop the advancement of tumors that are present in the lungs.

This may help patients enjoy a longer and better-quality life.

You can find out more about this advance in cancer therapy in the journal Radiology.

How to Know if a Lump is Benign or Malignant
How can you tell whether a lump is benign or malign? Your doctor will know how to tell. Read this article to learn more about the process. Read more »
Link copied!
Interesting Articles
Treatments
Pharmacological Treatment of Ear Infections