While vegetable milks are beneficial under certain conditions, it's not entirely true that they exceed the benefits of cow milk. For this reason, it's important to compare them. Find out more! 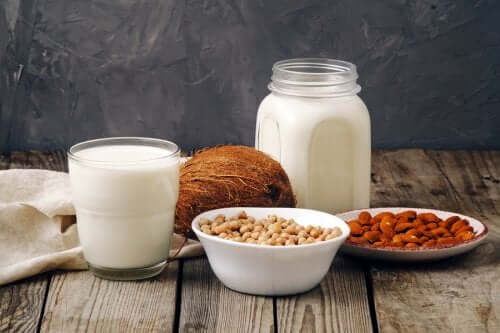 Have you ever compared vegetable milks? Are cow and vegetable milks that different? Are vegetable milks really a positive change from consuming cow milk? Despite the prejudices surrounding milk consumption, scientific evidence continually contradicts itself. This means that there’s no causal association between drinking cow milk and disease development.

For this reason, the objective here is to mention the properties in cow milk and to compare it with vegetable milks in order to learn about the benefits supported by science and to bust the myths that are shared nowadays.

Animal milk, mainly cow milk, has been part of the western diet for many years. Doctors have associated intake with how much children grow during their developing years, an indicator that tells us about an adequate growth and development.

Nutritional contribution and impact on growth

Today, many families have chosen to consume milk that doesn’t come from animals, such as soy and almond milk, because of false beliefs. However, vegetable-based milks contain less protein and lipids than cow milk, so they don’t have the same impact on children’s growth. Remember that studies have shown that proteins are essential for ensuring muscle health.

In a study published in the American Journal of Clinical Nutrition in 2017, for every glass of vegetable milk consumed, children were 0.4 cm shorter than the population that consumed cow milk.

Also, there was a 1.5 cm (over half an inch) difference in the height of three-year-old preschool children that consumed three cups of vegetable milk per day compared to the child population drinking cow milk.

Milk and its nutrients aren’t essential

It’s true that there are other foods that are sources of calcium apart from cow milk and its derivatives. However, since it has a vegetable origin, substances called oxalates interfere with the bioavailability and absorption of this mineral.

Likewise, in order to cover the recommended intake values, large quantities of such foods should be consumed. In addition, milk contains lactose, vitamin D and peptides (mainly arginine and lysine) that facilitate the intestinal absorption of calcium.

You may be interested in:  Calcium and Vitamin D-Rich Foods to Care for Your Bone Health

Other myths related to the consumption of animal-based milk

1. Lactose is harmful to health

Approximately 35% of the population has an intolerance to this disaccharide. However, studies have shown that most adults with this condition tolerate up to 12 g (0.5 oz) of lactose per day – present in a 250 ml (8.5 fl oz) glass of milk.

We also want to highlight that lactose-free dairy products on the market only benefit people with lactose intolerance.

2. Milk and its derivatives increase the development of cardiovascular diseases

This statement is related to the contribution of saturated fatty acids. However, these fatty acids (lauric, mystyric and palmitic) would only have a negative effect if consumed in isolation and in excess, which is rarely the case when talking about milk.

In addition, milk contains stearic and oleic acid that diminish the concentrations of cholesterol in blood, as well as calcium, a cardioprotective mineral. This is affirmed by a study published in the magazine Nutrición Hospitalaria.

As we’ve shown, there are myths that unfairly claim that cow’s milk is harmful to health. However, as we’ve seen, it’s a valuable beverage from a nutritional point of view and can be part of a balanced diet at any stage of life, as long as you don’t have any condition that would discourage its use.

Comparison of vegetable milks: use during illness

The treatment of chronic non-communicable diseases and hormonal disorders is multidisciplinary. For its correct nutritional approach, there are certain nutrients that we have to restrict or supplement. That’s why many diseases can benefit from replacing cow milk consumption with vegetable origin milks.

Since they have a high carbohydrate load and very low protein intake, doctors recommended them for patients with kidney disease. This is done in order to avoid hyperfiltration in the kidneys.

Specialists recommended almond milk for those who are allergic to milk protein and, because of its calcium content (higher than other vegetable milks), it’s recommended for women going through menopause.

Because of its isoflavone content – vegetable compounds with hormonal activity similar to estrogens – it benefits women in menopause.

Discover: Soy Protein: Is it Good or Bad for Your Health?

As it has a high intake of medium chain fatty acids (MCA) and a low intake of carbohydrates, it contributes to decreasing the respiratory load, so specialists recommend it for people with respiratory disorders (asthma, COPD). Likewise, given its caloric contribution and MCL, people with malnutrition benefit from its consumption.

It’s important that, when you buy these drinks, you carefully look at the nutritional label since many of them have a high content of added sugars. Due to the sugar intake and high cost, you can easily prepare these drinks at home using simple recipes.

The eternal debate: can we compare cow and vegetable milks?

To conclude, cow milk is completely different from vegetable milks. Therefore, we can’t substitute it without scientific foundation or medical guidance.

Some people claim certain facts about the properties contained in vegetable milks that have placed them as a superior product to cow milk. However, most of these are myths and both types of milk can be beneficial in certain situations.

By comparing vegetable milks, we can get to know more about their properties and the benefits of each one. This is especially true when talking about how to treat certain conditions and diseases. Likewise, knowing the nutritional contribution that cow milk and its derivatives have, we can confirm that they can be included in a balanced diet at any stage of life.

3 Must-Try Coconut Milk Recipes
Coconut milk is a versatile plant milk that can easily replace dairy in many recipes. Do you want to learn what you can make with coconut milk? Read more »
Link copied!
Interesting Articles
Nutrition
Breaking the Myths Regarding Gluten