Corticotropin stimulates two of the three areas of the adrenal cortex where cortisol and corticosterone glucocorticoids secrete. Learn all about it in this article. 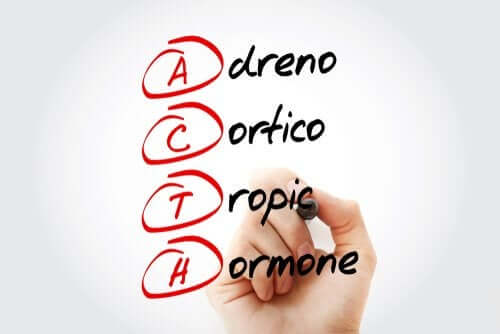 Corticotropin, also called adrenocorticotropin (ACTH), is a polypeptide hormone made up of 39 amino acids. Produced daily in small amounts (about 10 mg) by the pituitary gland, it stimulates the adrenal glands.
Thus, ACTH stimulates two of the three areas of the adrenal cortex that secretes cortisol and corticosterone glucocorticoids. However, it also stimulates the reticular zone that produces androgens. Its biological function is to stimulate cortisol secretion. This way the body makes more corticotropin during tense, stressful times.

The pituitary gland synthesizes ACTH in response to the release of the corticotropin-releasing hormone (CRH) by the hypothalamus. Similarly, the adrenal glands produce a hormone called cortisol that helps the body manage stress. This is because cortisol is necessary for living. In this way, its levels of in the blood remain under control.

The purpose of an ACTH analysis is to use it as an indicator of pituitary function and to detect any problems in the adrenal glands. It’s useful in the differential diagnosis of the following diseases:
When cortisol levels rise, ACTH levels normally decrease. When cortisol levels decrease, ACTH levels usually increase.
However, there may be a high level of ACTH and a low level of cortisol or vice versa. This could be due to a problem in the adrenal glands. However, low levels of ACTH and cortisol could also be due to a pituitary problem.
When ACTH production is excessive, it can be due to an overactive pituitary gland or, sometimes, a lung tumor.
Both ACTH and cortisol levels change throughout the day. So, corticotropin normally reaches the highest level in the early morning, between 6:00 am and 8:00 am. However, the lowest level occurs in the afternoon, between 6:00 pm and 11:00 pm.
If your doctor thinks it necessary, they’ll measure your ACTH levels either in the morning or in the afternoon. They usually measure cortisol levels when they measure ACTH also. Corticotropin releases in pulses so that your blood levels can vary from one minute to another.

Normal corticotropin values ​​for a blood sample taken early in the morning are less than 80 pg/mL or 18 pmol/L. However, they’re less than 50 pg/mL or 11 pmol/L in afternoon measurements.

What can a higher than normal ACTH level mean?

When corticotropin levels are higher than normal, it may indicate the presence of diseases such as:

You may also be interested: Lower your cortisol through healthy habits

An ACTH level below normal

When corticotropin values are below normal they may indicate the presence of pathologies such as:

The measurement of corticotropin levels can be affected by many factors, such as the time of day when the blood sample is taken. For this reason, you must take into account the medical information of other tests, especially relating to the level of cortisol in your blood.
Pituitary Adenomas: Causes and Symptoms
Most pituitary adenomas are benign and slow-growing. You can identify them because they remain inside the pituitary gland or in its adjacent tissues. Read more »
Link copied!
Interesting Articles
Illnesses
Discover How Diabetes Affects Eyesight