Corticophobia or the Fear of Corticosteroids

Corticosteroids, taken correctly, with an adjusted dose and in a limited time, don't necessarily have side effects, although many are afraid of them. In this article, we explain the fear of corticosteroids. 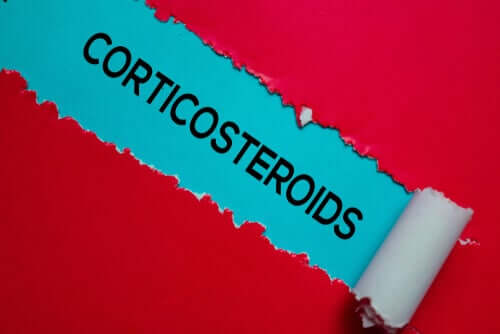 Corticophobia is the name given to the fear of corticosteroids. Corticosteroids are drugs that help regulate the response of our immune system and reduce inflammatory processes.

The most common corticosteroids are prednisone, cortisone, and hydrocortisone. The truth is that we currently use them to treat numerous diseases. For example, inflammatory diseases such as arthritis or asthma.

We also use them to treat autoimmune diseases, in which the immune system attacks our own tissues. One of these diseases is lupus. Similarly, they’re necessary for the treatment of adrenal gland insufficiency.

However, although they’ve become a fundamental pillar of today’s medicine, they’re not free of side effects. In this article, we’ll explain why this fear of corticosteroids arises and what to do about it.

Why is there a fear of corticosteroids?

As we’ve already mentioned, corticosteroids are widely used in medicine today. They’re drugs that mimic the effect of hormones that our adrenal glands produce in a physiological way.

We can take corticosteroids orally, topically, by injection, or even in the form of intranasal sprays. The form of administration is chosen according to the pathology in question. In addition, each of them has a number of side effects.

Because the fear of corticosteroids has to do with the number of side effects they have, a negative view of these drugs has been spreading. However, this perspective prevents us from correctly assessing the benefits they produce against the possible risks.

In order to understand this fear of corticosteroids, it’s important to understand their most frequent undesirable effects. However, we also need to understand that, most of the time, if a doctor prescribes them, it’s because their use will significantly improve the illness the person is suffering from. Some of the effects are:

However, it’s important to know that not all people taking corticosteroids experience these effects. It all depends on the dose, how long the patient takes them, and the means of administration. Most of the effects we mentioned above appear only in the case of oral administration.

Atopic dermatitis and the fear of corticosteroids

The fear of corticosteroids is gaining strength with respect to certain conditions. For example, many parents now refuse to use corticosteroids to treat atopic dermatitis in their children.

Atopic dermatitis is a skin condition that mainly affects children, causing redness and continuous itching. Creams containing corticosteroids are a common means of treatment. It’s unlikely for problems to arise if you follow the treatment recommendations.

Even so, parents are increasingly reluctant to use them. There’s a tendency to think that the side effects of oral corticosteroids are the same when using ointments.

This fear of corticosteroids also stems from a lack of trust in physicians. But, we should keep in mind that, if we use them properly and according to their prescriptions, there’s no reason why harmful effects should occur. At least in the case of atopic dermatitis, they’re not frequent.

You may be interested in: How to Apply Topical Corticosteroids

In conclusion, the fear of corticosteroids stems mainly from ignorance and mistrust. However, we must bear in mind that doctors assess both the benefits and the risks when prescribing a drug.

Therefore, we can’t let negative connotations invade us. While it’s true that corticosteroids – especially when taken orally and for a long time – can have side effects, this isn’t true in all cases.

Non-Steroidal Anti-Inflammatory Drugs (NSAIDs)
Non-steroidal anti-inflammatory drugs or NSAIDs are one of the most widely-used drugs due to their powerful analgesic effect. Read more »
Link copied!
Interesting Articles
Healthy habits
How Does Caffeine Affect the Brain?