Colds During Pregnancy: How to Prevent and Relieve Them

Colds during pregnancy can cause certain doubts. However, you should take some tips into account to relieve your symptoms and prevent them. 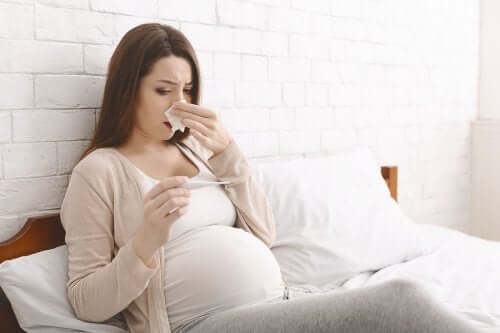 On several occasions, colds during pregnancy come brings many questions and discomfort. In fact, many symptoms appear when a person has a cold. Thus, we recommend a series of steps to relieve them, as you should be more vigilant during pregnancy.

The common cold is an upper respiratory tract condition caused by a virus. It’s one of the most common diseases and one of the main primary care consultations.

Most of its symptoms, such as a runny nose, sneezing, cough, fever, and headaches, cause discomfort. They usually last from 4-10 days.

There’s no curative treatment for a common cold. As it’s caused by a virus, your body itself will generate a defense system against it. Thus, you can only take drugs to relieve the described symptoms. However, in the case of pregnant women, they’re very limited.

This article may interest you: 7 Natural Ways to Boost Your Immune System and Prevent Colds and the Flu

How colds during pregnancy manifest

Most colds occur during the spring and fall. Symptoms usually begin with nasal congestion or a cough and worsen as the days go by. Most cases occur without fever. However, the manifestation of this symptom isn’t alarming if as long as it doesn’t exceed 102°F.

Pregnant women, especially first-time mothers, have many questions regarding the cold symptoms that appear and, also, regarding how this condition affects the fetus.

Fortunately, the viruses responsible for colds don’t affect fetal development during pregnancy. Thus, there are no health risks. However, it’s always a good idea to go to your obstetric checkups and report the symptoms that you’ve been suffering from.

This article may interest you: The Main Differences between a Cold and the Flu

Techniques to prevent colds during pregnancy

The best and most effective technique to avoid the spread of infections is hand washing. The contagion usually occurs due to “respiratory droplets”, which we expel when we speak, cough, or sneeze. These are the small drops of saliva that aren’t usually visible.

Many people think that they should only wash their hands when they’re going to cook. However, it’s a good hygiene habit to wash your hands several times a day. This greatly reduces the risk of infections.

In addition, experts recommend avoiding being in contact with children or older people with similar symptoms. If you have children and they have a cold, experts recommend washing their hands frequently and avoid sharing food or drinks. Likewise, not kissing on the mouth is another measure to take into account when you have cold symptoms.

Colds during pregnancy: what to do to relieve your symptoms

As we mentioned above, the common cold appears due to viruses and there’s no curative treatment for it. All the pharmacological remedies and medications that exist seek to reduce the discomfort the symptoms associated with this condition cause.

One of the main measures that a pregnant woman should keep in mind when she has a cold is to avoid self-medication. A doctor should prescribe the appropriate drug treatment. In addition, you shouldn’t consume the drugs you usually take nor those other people recommend.

But you can resort to some home remedies that relieve symptoms and that you can practice frequently and easily:

Finally, you should remember that, if you’re pregnant, you shouldn’t self-medicate. Instead, opt for natural solutions that relieve your cold symptoms and consult your doctor if in doubt.

Why We Catch Colds
Several factors can influence the onset of colds. However, in general, a cold is a viral infection. Why do people catch colds? Read more »
Link copied!
Interesting Articles
Pregnancy
Exercising While Pregnant: Is it Safe?

Interesting Articles
Health and wellness news
What is Quaternary Prevention?

Wellness
Tinnitus: What it is and How to Prevent it