Cold Intolerance - Why Are Some People More Sensitive?

Disorders such as anemia, anorexia, or hypothyroidism can make us develop cold intolerance. This is why it's important to consult a professional if you notice that your sensitivity to temperature is higher than normal. 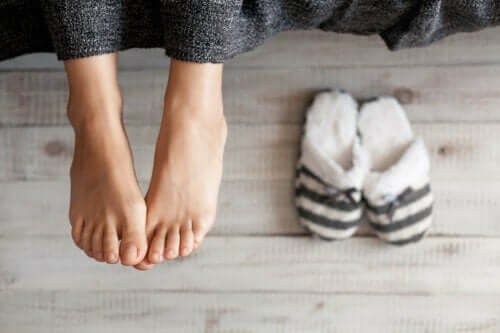 Cold intolerance can be tricky. Even though it’s common to spot people outside in short sleeves and even swimming in lakes during cold temperatures, it isn’t uncommon to know of some who don’t want to leave the house during the winter. OK, so what makes some people more sensitive to cold temperatures?

Every person has a greater or lesser sensitivity to temperature. However, this sensitivity can be a symptom of illness if it’s extreme to the point of not being able to tolerate the cold.

Certain factors increase the risk of cold intolerance, such as having low body fat or a chronic health problem. Today’s article will describe the main causes of this condition and how to diagnose it.

Cold intolerance – why are some people more sensitive to low temperatures?

The kind of cold intolerance in which a person can’t stand being outside is usually a symptom that there’s something wrong with the body. One of the most frequent causes is low body fat index, as we mentioned above.

This is because fat is an insulator that allows us to maintain body heat. Women tend to be more sensitive to cold, among other things, because there’s a much higher incidence of thinness in comparison to men.

The hormonal changes during certain stages can also trigger this problem, especially during menopause. You’ve probably heard about hot flashes, but increased sensitivity to temperature changes is also common.

Furthermore, it could be a symptom of an infection, such as a cold or the flu. The same is true for those with metabolic problems. Specifically, the body generates less body heat in the absence of thyroid hormones in those afflicted by hypothyroidism.

Read about Dry Cracked Hands: Protection from the Cold

Other conditions that lead to cold intolerance

The symptoms of anemia vary and are non-specific for the most part. People with this condition usually feel tired and weak, and some are also cold intolerant. In this case, the symptom is due to the failure in the circulation that originates anemia.

Certain blood vessel problems are also related, including Raynaud’s syndrome. This is a disorder in which there’s an abnormal narrowing of the blood vessels in response to certain stimuli, such as cold or stress.

Cold intolerance can be due to a chronic disease known as fibromyalgia. People with this condition experience generalized muscle and bone pain, often associated with hypersensitivity. Its incidence is much higher in women.

There are no lesions in this condition that can explain this kind of reaction, but it is disabling. This is because it alters the rest patterns and thus the psychological well-being.

Finally, note that, although infrequent, the cause could reside in the hypothalamus. It’s the area of the brain that regulates body temperature. For this reason, any disease that affects it can also alter the regulation of temperature.

How to diagnose this problem?

A physician must do an extensive physical examination in order to diagnose the cause of cold intolerance. First of all, they’ll probably check a person’s weight and body fat index and also do a blood test.

This test will reveal the levels of thyroid hormones and determine whether there’s anemia or some other condition. The professional will probably do other tests after ruling out something more serious such as a hypothalamic disorder.

For this reason, note that long-term cold intolerance is a reason to consult a doctor. This is because it could be a symptom of another disease. So, better safe than sorry.

Is Hot or Cold Food Healthier For Us?
We don't usually question the importance that food temperature can have on our health. Is hot or cold food healthier? Learn the answer here! Read more »
Link copied!
Interesting Articles
Anatomy and physiology
A Fracture or a Sprain: What's The Difference?