Numerous studies have shown that certain polyphenols in coffee have antidiabetic properties. Therefore, they believe that this food could help regulate blood glucose. In this article, discover the association between coffee polyphenols and diabetes. 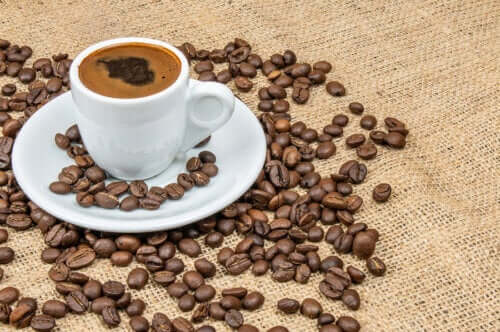 InshNumerous studies state that certain dietary polyphenols have anti-diabetic properties, suggesting that they may be a dietary treatment for type 2 diabetes prevention and treatment. In this regard, experts know that coffee polyphenols play a role in the regulation of blood glucose.

People have demonized coffee for many years. However, drinking it regularly has many benefits, which is why it’s a good idea to include it in your diet.

Polyphenols and properties of coffee

Next, as an article published in the Journal of Agricultural and Food Chemistry states, coffee is a drink that comes from processed and roasted seeds of a fruit called a coffee cherry. In fact, it’s one of the most popular drinks around the world.

Overall, it contains more than a thousand different chemical substances, including:

Coffee is a very important drink, as it’s one of the most popular non-alcoholic drinks around the world. For example, Finland has the largest per capita consumption of coffee worldwide, followed by Brazil, which consumes 13 pounds of coffee per capita.

In fact, coffee is a mixture of numerous functional bioactive compounds that could reduce the risk of some conditions, such as:

Read on to learn more: Nutrition and Management of Type 2 Diabetes: Recommendations and More

Diabetes is a chronic disease caused by insulin secretion alterations or when the body doesn’t use it effectively. In fact, it’s a very prevalent disease. It can lead to cardiovascular complications, retinopathy, nephropathy, neuropathy, ulcers, and gangrene in the limbs.

According to a study published in Diabetes Research and Clinical Practice, 592 million people will suffer from this disease worldwide by 2035.

Experts have interested themselves in and studied dietary treatments, including foods rich in polyphenols. It’s suggested that coffee polyphenols reduce the risk of diabetes and may boost its treatment.

According to research published in Oxidative Medicine and Cellular Longevity, polyphenols are phytochemicals with phenol rings.

Foods of plant origin, such as the following, contain hundreds of polyphenols:

What experts know about the impact of coffee polyphenols and diabetes

For example, in a 2006 study published in the Journal of Nutrition by Battram et. al., experts observed glucose levels decrease significantly after the consumption of decaffeinated coffee. Thus, they assessed the benefits of consuming coffee without its main component, caffeine.

On the other hand, chlorogenic acid (the second major component in coffee), quinidines, and magnesium have been shown to affect glucose metabolism.

In a 2012 study by Ong et. al., published in the journal PLoS One, they found that chlorogenic acid delays glucose intestinal absorption. It does this through the inhibition of glucose 6-phosphate translocase 1 and the reduction of the sodium gradient responsible for glucose transport.

Also, in a study published in the journal Nutrients, scientists found that the consumption of 400 ml of coffee (with 2.5 mmol of chlorogenic acid per liter) increased glucose-dependent insulinotropic polypeptide (GIP; gastric inhibitory polypeptide) and glucacon-like peptide 1 (GLP-1).

Overall, all the phenolic compounds present in coffee have a powerful antioxidant capacity. It protects against atherosclerosis, endothelial dysfunction, and hypertension.

In a 2017 study published in the journal Nutrients, the experts found benefits to moderate coffee consumption (equivalent to one to three cups a day). This corresponds to a 101-337 mg/day polyphenol consumption.

Overall, it had a beneficial effect on cardiovascular risk factors:

Make sure you read: Type Two Diabetes: Nutrients to Avoid and Include in Your Diet

To conclude, coffee is one of the most popular beverages around the world. Plus, scientists have discovered it has numerous properties thanks to its bioactive compounds. Mainly, experts have studied the effects of caffeine and coffee polyphenols in numerous diseases.

Experts are aware of the properties of many polyphenols in foods. However, they’ve observed that coffee polyphenols regulate energy metabolism mechanisms. They do this mainly by mediating glucose concentration in the body.

Overall, past human studies yielded inconsistent results. Therefore, experts must continue other studies to test theories. Then, they can confirm or debate the antidiabetic effects of dietary polyphenols.

Your morning coffee may be healthier than you think!

Athletes With Diabetes: What You Should Be Eating
Athletes with diabetes need to take extra dietary precautions. Here's some dietary guidelines to consider if you're an athlete with diabetes. Read more »
Link copied!
Interesting Articles
Diet
Discover the Menopause Diet