Chronic Diseases: What You Should Know

Chronic diseases are a huge public health problem worldwide. The aging population is one of the main causes. In today's article, we'll explain what the current situation is and how you can prevent these diseases. 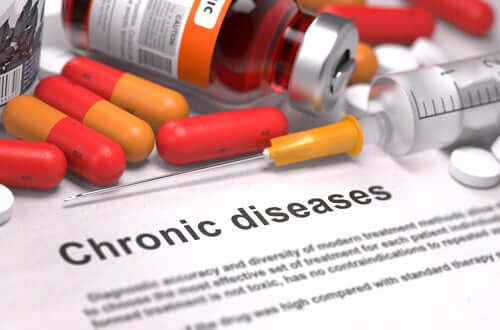 Chronic diseases are diseases that affect the body over a significantly long period. They involve symptoms that exceed six months in length.

In general, chronic diseases evolve slowly. Therefore, they’re capable of impairing the various body systems and organs. It’s also common for a chronic disease to be linked to another one. In fact, this is the case with arterial hypertension, as it often coexists with diabetes. Also, hypothyroidism is often associated with various hormonal conditions.

Estimates indicate that chronic diseases lead to about 75% of the deaths worldwide. Heart problems, cancers, diabetes, and respiratory conditions account for more than 60% of these deaths. Overall, a third of people under sixty die from chronic conditions. However, it’s not exclusively a problem that affects the elderly. In fact, it extends far beyond this age group.

As for diabetes, its relationship with obesity is alarming. Diabetes is becoming more frequent with the prevalence of overweight people around the world. Estimates indicate that the number of diabetics will double in most countries in ten years.

The most common chronic diseases

There are many common chronic diseases and they cause the most deaths. However, the four most relevant diseases in this group are:

Also, half of those deaths happen in people under the age of 70. Thus, people are dying at a younger age, and people in poorer countries often get sick and pass away well before their time.

Chronic diseases are preceded by many risk factors. These are often due to the unique characteristics of the environment or the person, which makes them more susceptible to disease. The risk factors are – for the most part – well-known, and health organizations take many actions to try to keep them at bay. In fact, there’d be up to 80% fewer cases of heart disease and diabetes and 40% few cases of cancer if we could control the risk factors.

Among the most relevant risk facts, we can find:

Keep discovering: The Risks of a Sedentary Lifestyle on Your Heart

Controlling the risk factors is in your hands

Chronic Obstructive Pulmonary Ddisease (COPD)
Chronic obstructive pulmonary disease generally affects people ages 35-40, but it is often not diagnosed until the person is over the age of 50 years old Read more »
Link copied!
Interesting Articles
Illnesses
Is it Possible to Be Allergic to Electricity?