Childhood Schizophrenia - Everything You Need to Know

Childhood schizophrenia is a mental disorder that causes aggressive behavior and sudden changes in emotions in little ones. How do you go about recognizing it? Continue reading to find out. 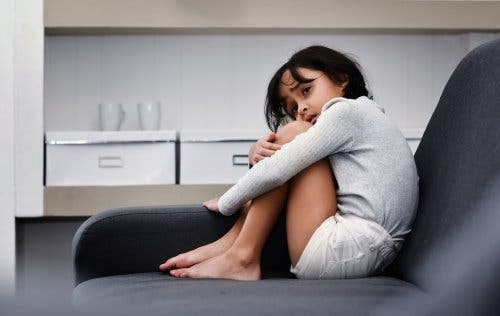 Have you ever heard about childhood schizophrenia? It’s a rare mental illness that experts still need to investigate and discover much about. We do know it requires lifetime treatment.

Schizophrenia is a chronic psychotic disorder. It has to do with severe deficits in cognition, personality disorders, hallucinations, and loss of contact with reality. Today we’ll explain more about this disease in children.

In most cases, the onset of schizophrenia occurs between the ages of 14 and 35. It’s considered early-onset when it happens between 13 and 18 years of age. Note that the prognosis isn’t good when it happens earlier.

Only 1 in 10,000 children are diagnosed in childhood, though. This datum makes childhood schizophrenia a rare yet complicated mental illness.

Everything you need to know about childhood schizophrenia

Are hallucinations the main symptom?

Firstly, hallucinations aren’t always a confirmation of childhood schizophrenia. They may also be due to psychological trauma or some type of autism.

Children with schizophrenia also suffer from thought disorders, impulsive aggressive behavior, and other negative symptoms such as apathy and social withdrawal. The latter could also be confused with depressive states. For this reason, a diagnosis that takes into account the whole picture is important.

Other symptoms of childhood schizophrenia

In general, the characteristics of schizophrenia include problems that affect thinking, behavior, and emotions. Delusions and hallucinations are frequent, as is disorganized speech.

Unfortunately, this disease is difficult to detect in the early stages. However, children may experience delays in speech and also in crawling and walking. Also in other atypical motor behaviors such as shaking parts of the body and swaying.

Other disorders such as strange behavior and behavioral disturbances with family and friends may arise later. Sleep problems, irritability, and lack of motivation are also common features.

A violent attitude is another symptom of childhood schizophrenia, about which much remains to be studied at such an early age. This study was based on children between 4 and 15 years of age within the schizophrenic spectrum.

72% of them had a history of violent behavior, while a third stood out for their significant aggressiveness. They couldn’t find a cause for these episodes in some cases, which is why this internal violence is considered impulsive.

The cause of childhood schizophrenia is still unknown, although it could be the same as in adults. Studies point to genetic causes and alterations in brain chemical processes (dopamine and glutamate).

However, some factors that may influence the appearance of this disease are:

The risk of suicide is one of the greatest fears of patients and their families, as well as doctors. This is very important to keep in mind because statistics show that 90% of young people who commit suicide have a mental disorder.

Specifically, 30% of young people suffering from schizophrenia will attempt suicide throughout their lives. Therefore, monitoring is essential from an early age.

Schizophrenia requires lifelong treatment regardless of whether it started during childhood or adulthood. The most important thing is to start as soon as possible in order to reduce psychotic episodes and their long-term effects.

Now you know a little more about the symptoms and characteristics of childhood schizophrenia. Keep in mind that many symptoms can be related to other mental disorders. Therefore, only a physician can make a final diagnosis, as well as suggesting a personalized treatment.

Mental Illness in Children and Its Symptoms
The symptoms of mental illness in children aren't easy to recognize. In fact, there are times when we might believe that a certain behavior is either temporary or that they're just acting out. If you have any questions, consult a therapist. Read more »
Link copied!
Interesting Articles
Illnesses
Everything You Should Know about Hypochondriasis