Childhood asthma makes it hard for children to play and be physically active due to breathing difficulties. 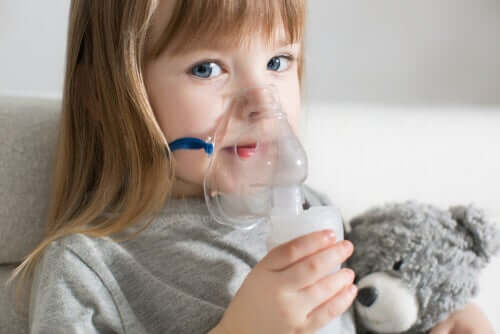 Childhood asthma is a very common condition. In fact, it’s the most frequent chronic disease among children. Current estimates indicate it affects between 5 and 15% of the child population and its incidence continues to increase gradually.

Asthma is a disease characterized by the inflammation of the airways. Thus, it leads to breathing difficulties that manifest through coughing, choking and wheezing when trying to breathe in and out. This condition is often related to allergies. This is why it’s one of the reasons why more and more children have it. For instance, it’s common for an asthmatic child to also be allergic to pollen or dust mites.

In today’s article, we’ll explain the most common causes of childhood asthma together with its symptoms. Likewise, we’ll explain how doctors diagnose it since it’s very important to distinguish it from other diseases to prescribe adequate treatment.

Childhood asthma, as we mentioned above, consists of the inflammation of a child’s airways. Thus, the air encounters more resistance when going in and out of the lungs. This condition usually appears as a crisis.

Most children with childhood asthma have their first attack before the age of four. What happens here is that, although the inflammation of the airways remains, it worsens during these crises. Then, the symptoms worsen, as well.

Note that more than half of asthmatics are allergic to some substances such as pollen or dust mites. This is the condition that triggers most asthma attacks.

This condition usually manifests as labored breathing and chest congestion. Children with this condition often have coughing attacks. These tend to worsen when there’s an infection or a cold or when a child is under stress.

Also, there’ll be wheezing while the child tries to breathe. It typically sounds like a whistle. However, know that everyone is different, so the symptoms vary from child to child.

Overall, there are two main seasons of childhood asthma due to its association with allergies:

Even though most children only suffer from the symptoms mentioned above, some of them may experience complications. Often, childhood asthma leads to sleeping problems. This is due to labored breathing.

Also, respiratory infections take longer to heal. Also, children with asthma are usually more tired and have trouble with simple activities like playing and running around.

Childhood asthma is difficult to diagnose, especially in children under 5. This is either because there are other conditions with similar symptoms or because they pertain to asthma – such as rhinitis, bronchiolitis or sinusitis.

Some tests can help a doctor with the diagnosis. A spirometry, for instance, allows them to evaluate lung function. If this test is inconclusive, they’ll use an exhaled nitric oxide test instead.

Childhood asthma is a rather prevalent disease with multiple causes and risk factors. Also, genetics plays an important role together with stress, cold, allergies, etc.

It’s difficult to diagnose because its symptoms are similar to those of other diseases. Thus, it’s important to describe the symptoms in detail to your doctor so they can carry out the necessary tests. Then, you can get proper treatment for your child and keep it from getting worse.

8 Tips to Treat and Control Asthma
Asthma is a chronic respiratory illness caused by the tightening of the bronchi. In this article, we'll give you tips to treat and control asthma. Read more »
Link copied!
Interesting Articles
Illnesses
Excessive Appetite: What Are Its Causes?