The characteristics of retinitis pigmentosa comprise a group of diseases of genetic origin that manifest in various ways. They lead to a gradual loss of vision, which is slow in some cases and fast in others. 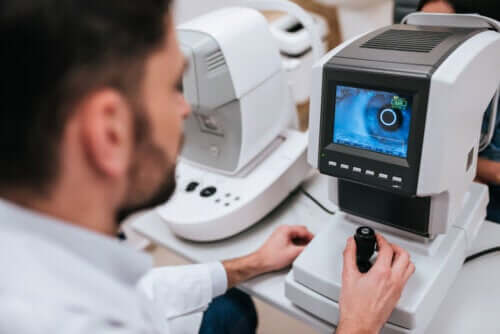 There are many characteristics of retinitis pigmentosa since it isn’t a single disease. In fact, it’s a group of hereditary, degenerative, and progressive diseases. Estimates indicate it affects one in every 4000 people in the world. However, this figure varies according to the region where it occurs.

It’s a rare disease because only the mutations that cause half of the cases have been identified so far. This is despite the fact that retinitis pigmentosa was first described by Donders in 1885, more than a century ago.

The characteristics of retinitis pigmentosa are complex and it’s a disease that science doesn’t yet fully understand. We currently believe its development has a genetic origin but also caused by various environmental factors.

There’s still no conclusive research, though.

The characteristics of retinitis pigmentosa

This is a group of genetic disorders that affect the retina’s ability to respond to light. It usually affects both eyes and leads to a gradual loss of vision and even blindness, in some cases.

The retina is the layer that lines the inner part of the eye. Its function is to receive and process images to send them to the brain through the optic nerve. In retinitis pigmentosa, some retinal cells are useless. Generally, there’s also an accumulation of pigments in the back of the eye.

Most commonly, this type of disease appears between the ages of 25 and 40 years old. However, there have been manifestations before the age of 20, and before adolescence, though rarely. In addition, it can also happen after the age of 50.

Read about Presbyopia or Eyestrain

The cause of this disease is basically genetic, i.e. hereditary. The problem almost always originates in the existence of one or two defective genes. In other cases, a genetic mutation occurs in people with no family history of the disease.

There are basically four types of retinitis pigmentosa:

We currently suspect that environmental factors are involved in the emergence of this disease. People have also suggested that the ingestion of lutein, antioxidant vitamins, and Omega 3 slows down the progression of this disease. Likewise, the consumption of tobacco, alcohol, sun exposure, and stress seems to speed it up.

Other facts about the disease

The first manifestation of the disease is usually difficulty seeing in low light conditions and at night. The ability to perceive the peripheral visual field is also gradually lost, which results in tunnel vision. In other words, people with this condition can only see who’s in front of them.

The deterioration usually occurs slowly but progressively. Oftentimes, many years go by between the appearance of the first symptoms and the diagnosis of retinitis pigmentosa. Also, you must note that the disease doesn’t affect all people equally, even if they’re from the same family.

There’s no cure for this disease at the moment , but there’s ongoing research on the subject. Scientists believe that there are currently about two million people in the world with this disease. Estimates also indicate that one in 80 people carry the defective genes that cause it.

A person who’s been diagnosed with this disease will need psychological support to cope with the possibility of total blindness. Virtually everyone can lead an independent life, even when blind, if they physically and mentally train themselves to do so.

Everything You Need to Know about Visual Impairment
Visual impairment greatly limits those who suffer from it. Although it’s a very common problem, there are technological aids. Read more »