Moyamoya disease is a rare condition of the carotid arteries. It's a rare and serious pathology, described less than a hundred years ago. We'll tell you about its main characteristics in today's article. 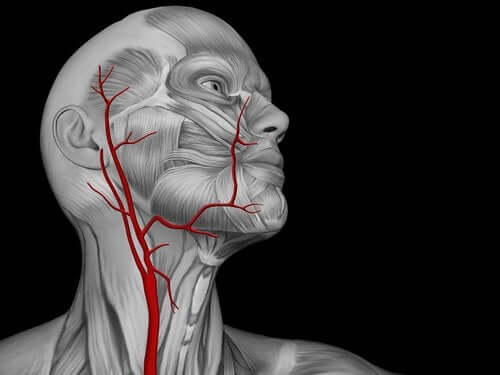 Moyamoya disease is an arterial disorder. Specifically, it’s a disorder of angiogenesis – of the formation of blood vessels. It affects the internal carotid arteries that carry blood to the brain.

From the neck, each pair of vessels enters the skull carrying the blood pumped by the heart to the brain. Thus, any problem in these vessels is potentially lethal.

In moyamoya disease, the internal carotid arteries become narrowed, decreasing the blood flow to the brain. Since one of the priorities of the human body is to ensure proper brain circulation, it develops a network of small blood vessels to bypass any obstruction.

These new, neovascular vessels generate an accessory pathway for blood to flow from the heart. Furthermore, the small collateral vessels located at the base of the skull, when viewed through complementary diagnostic methods, emulate cigarette smoke floating in the air.

Moya-moya means “cloud of smoke” in Japanese, hence the etymology of the name of this disease. It’s also the word that describes the smoke coming out of volcanoes. Scientists Suzuki and Takaku gave the name to this disease in 1969 after looking at some angiographic images of it.

Moyamoya disease has an age distribution in two peaks. Generally, symptoms are present in children and middle-aged adults. However, the group most affected is the one with infants between five and ten years of age. The second group is made up of people between thirty and fifty years old.

The most affected area is Southeast Asia, although there are cases worldwide. The countries of Japan, China, and Korea have the largest number of global cases. For example, the prevalence in Japan is one in every thirty-two thousand inhabitants.

Also, a series of studies conducted in Southeast Asia discovered that for every two thousand Japanese adults without symptoms of the pathology, there’s one who’s brain images are compatible with moyamoya disease.

Check out these Six Exercises to Keep Your Brain in Shape

The etiology of the disease isn’t clear yet. However, we suspect it’s genetic and that the arterial obstruction has a hereditary component.

In any case, there are five risk factors that increase a person’s predisposition to it:

It usually begins with a stroke. Either because the arterial blockage doesn’t allow enough blood flow to the brain, or because the accessory vessels are weak and break under stress — both ischemia and hemorrhage can be lethal.

Strokes often provide early warnings. In children, repeated seizures often occur in response to a lack of brain circulation. In adults, there may be transient ischemia expressed as hemiparesis or hemiplegia.

These are some of the symptoms of poor brain circulation:

Crying is a common trigger in children, especially when they hyperventilate by doing so intensely. Hyperventilation requires a change in the blood flow to the brain that’s regulated through the constriction and dilation of the blood vessels and can lead to rupture.

Read more about the Auscultation of Veins and Arteries

The only way to diagnose moyamoya is via brain imaging. Angiography and angioresonance are the main studies with which to detect this kind of illness. This is because any decrease in arterial light in the internal carotids will be visible in the images obtained through them.

Finally, the treatment is:

All About Strokes
It is important to recognize the signs of strokes in time to be able to receive medical attention. This can mean the difference between life and death. Read more »
Link copied!
Interesting Articles
Illnesses
What Is Multiple Myeloma?