Characteristics and Treatment for Osteosarcoma

Osteosarcoma is the most frequent type of bone cancer and, unfortunately, it often affects young people. How does it manifest? How do physicians diagnose it? 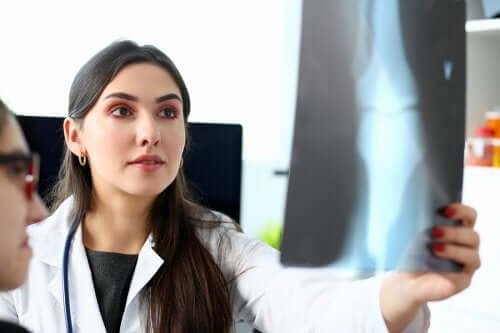 It’s a rare form of cancer, although it accounts for 3% of cancers in children. It usually affects long bones, such as those in the legs, but could actually afflict any bone.

Osteosarcoma usually appears in children and teens but could arise at any time in life. Treatment and prognosis vary greatly according to the size, location, and grade of a tumor.

The worse problem part is it can metastasize into other organs and, thus, be fatal. Continue reading, as today’s article will describe its development and evolution in more detail.

As we mentioned above, osteosarcoma is a malignant tumor that develops from bone-forming cells: osteoblasts.

These cells are in charge of the continuous growth and renewal of the bones, and so they’re more active in younger people.

The knee is the part of the body that’s most frequently affected by osteosarcoma. Unfortunately, there’s no way to prevent it and any viable treatment requires an early diagnosis. That is, it has to begin before it causes serious damage to the bone or before it metastasizes into other organs.

Do you know What Are the Characteristics of Progressive Ossifying Fibrodysplasia?

The symptoms of osteosarcoma aren’t too specific, and people often mistake them for other health problems, such as injuries. This is why it’s important to always consult a doctor if you notice there’s something wrong.

For instance, osteosarcoma usually causes pain in some bone or joint and there may be a swollen area near it. It often produces spontaneous injuries or bone fractures.

Normally, this tends to affect the leg or arm, since, as we have said before, it usually appears in the long bones of the body. When it causes pain, it can be worse when exercising.

In fact, this pain often occurs at night and keeps people from sleeping. The most obvious symptom in children is they may limp or have difficulty walking.

The causes of osteosarcoma are still unknown; however, certain factors increase the risk of having it:

Learn about the Types of Sarcoma and Its Characteristics

Diagnosis and treatment of osteosarcoma

A physician must carry out a thorough review and physical examination of the patient before they can diagnose them with osteosarcoma. They’ll probably also conduct complementary tests such as X-rays or CT scans.

In some cases, they do a biopsy of the tumor in order to analyze it. Furthermore, this is how they determine the degree of the tumor and thus they can figure out the best treatment for it. Similarly, they study it along with other tests with which they can find out if it’s metastasizing or not.

The treatment of osteosarcoma is complex and usually requires surgery. The goal is to eliminate all of the cancer cells and prevent disability in the affected area as much as possible. This is because some cases lead to limb amputation.

Chemotherapy works on this type of cancer but radiotherapy doesn’t seem to be effective for it. Currently, researchers are working on some clinical trials and studies, in order to find a more effective treatment of osteosarcoma.

Osteosarcoma is the most frequent type of bone cancer and usually affects young people. Remember, the symptoms are nonspecific, so it’s important to consult your doctor if you notice there’s pain or unexplained injury.

5 Primary Bone Cancer Symptoms You Should Know
Primary bone cancer symptoms are very specific, and spotting them in time can make a big difference in getting better. Read on and learn what they are! Read more »
Link copied!
Interesting Articles
Illnesses
Can Celiac Disease Cause Infertility?