Characteristics and Causes of Halitosis

Inadequate oral hygiene is usually one of the causes of halitosis or bad breath. Here are some important tips to prevent halitosis. 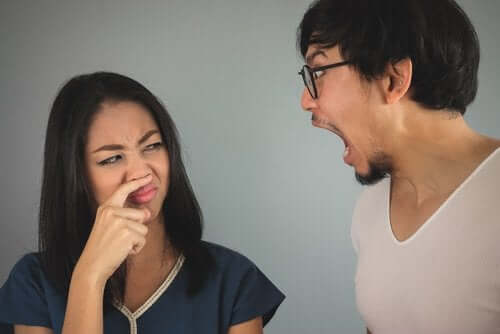 Few situations are as uncomfortable and shocking as noticing halitosis in yourself or having to be near someone with this problem. That’s why it’s important to know the causes. In either case, bad breath can seriously affect interpersonal relationships and even a person’s self-confidence.

Keep reading to find out what causes this kind of foul odor and how to get rid of it.

A little about halitosis

Usually, the triggers are of oral origin. In fact, a study published by Medifam states that 90% of the cases of halitosis originate in this cavity. In turn, the problem is related to the accumulation of bacterial plaque on the tongue in many of these cases.

The others are related to cavities, periodontal problems, smoking, food, and other oral, nose, or throat conditions, according to a Mayo Clinic publication.

In the latter case, some systemic diseases may be the cause of halitosis. Generally, these problems are respiratory, digestive, hepatic, and renal. Also, the use of certain medications or given organic conditions may play a role.

The truth is halitosis isn’t always detected by the person who has from it, but usually noticed by those who get close to them. It isn’t a health problem as such, but it does lead to social inconveniences.

It’s for this reason that’s important to detect the causes of bad breath to treat it accordingly. Continue reading for more detail on this.

The causes of halitosis

Before examining the causes of bad breath in detail, note that science already established the premise that halitosis is mainly due to bacteria. At least according to a 2006 British Medical Journal publication.

Bacteria in the mouth settle in areas with little oxygen — such as behind the tongue. These bacteria feed on any food debris that remains in the oral cavity, as well as dead cells, and some saliva elements.

Furthermore, the activity of these microorganisms generates gases, the ones exhaled when breathing. All of these are volatile sulfur compounds (VSC) and thus, their odors are quite strong.

According to the American Dental Association, the main measure to get rid of the aforementioned odors is to maintain proper oral hygiene. It includes brushing the teeth, which includes the tongue and the most hidden corners of the mouth. That said, let’s move on to the main causes of bad breath.

Most people brush their teeth superficially. Thus, it’s important to learn proper oral hygiene and include the tongue and remote areas of the mouth.

It isn’t necessary to brush vigorously, only carefully and frequently. This is because infected gums appear when you don’t use dental floss during your brushing session. You must use this element to remove any food debris that may go unnoticed.

It’s also advisable to visit your dentist at least twice a year.

This is one covered by a whitish or yellowish coating. A thesis presented at Universidad de las Americas indicates it’s due to an accumulation of bacteria or food debris as a result of inadequate oral hygiene. Sometimes, it’s also a symptom of gastrointestinal diseases.

To prevent this and other problems, you must gently clean the tongue with a soft bristle brush, trying to cover the entire surface. It’s good to clean it as much as you can but don’t go too far back as it may induce gagging.

Saliva is necessary to clean the bacteria on the teeth, gums, and tongue. However, some circumstances lead to dry mouth and bacteria proliferate in this environment and bring about halitosis.

The mouth gets dry when you don’t eat food regularly and keep an empty stomach for too long. t’s for this reason that you must eat often and have some snacks between meals if you have to.

Also, stress and anxiety lead to a reduction in saliva production, according to a recent study published in a dentistry journal.

Check out these Home Remedies for Bad Breath with Five Plants

There’s a widespread myth about how the frequent use of mouthwash can prevent bad breath. It isn’t true though. While it’s true that the rinse leaves behind a scented taste in your mouth immediately after you use it, any excess will irritate your oral cavity. As you can see, it’s best to use it in moderation.

Rinse water and a few drops of mint in it if you want a feeling of freshness. Actually, rinses with other essential oils are also effective, according to a study published in the Revista Odontológica Mexicana.

Other causes of halitosis to avoid

As we pointed out above, many other factors can cause bad breath. For example, smoking is one of them, and there are studies to confirm it. (The one published in the Open Access Macedonian Journal of Medical Sciences, for example.)

Also, other triggers include the use of medications and infections of the mouth, nose, or throat. In any of the above-mentioned cases, the best thing to do is consult a physician who can diagnose the problem. They should be able to prescribe a treatment that suits you.

Learn How to Treat Halitosis Effectively the Natural Way
Besides primary oral hygiene, it's important to drink a lot of water to treat halitosis. It's also effective to avoid elements that promote it's  appearance. Read more »
Link copied!
Interesting Articles
Healthy habits
How to Avoid Stress and Discomfort During a Flight

Healthy habits
The Pros and Cons of Sitting on the Floor

Sitting on the floor is quite good for you. After all, how much time do you spend in the chair…

You've never heard about biofeedback? Well, stick around then. It's a simple concept and its health benefits are many. So,…

Do you feel like there aren't enough hours in the day to get through all your pending tasks? Is it…