The Causes and Symptoms of Tularemia, or Rabbit Fever

Also known as rabbit fever, this is a type of bacterial infection, mainly registered in Europe, Asia, and North America. In this article, we'll you more about the causes and symptoms of tularemia. 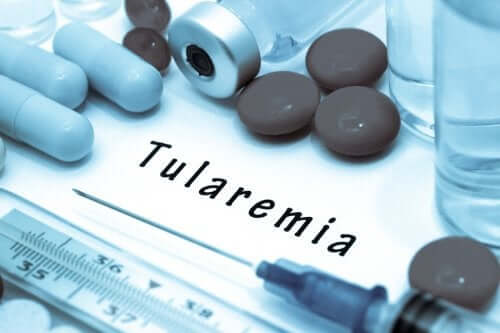 Tularemia is an infectious disease caused by the bacteria Francisella tularensis. This bacteria resists cold climates and substances like bleach are not effective at destroying it. However, it’s quite sensitive to many common household disinfectants. In the article to follow, we’ll tell you more about the causes and symptoms of tularemia.

This disease is an infection that circulates among animals but is capable of spreading to humans at some point. The species that function as a reservoir for the bacteria are small mammals.

We can mention mice and squirrels, as well as hares and rabbits, as animals that serve as a reservoir for the bacteria. Its worldwide distribution is in the northern hemisphere: Europe, Asia, and North America.

Physicians have known about the disease since 1911. It was precisely in California where an outbreak took place that led to the identification of the bacteria.

To date, one hundred years later, it’s considered a disease capable of being used as a biological weapon, which is why there’s a legal obligation to notify the authorities when a confirmed case appears.

Tularemia has two preferential ages where it appears: children from five to nine years old and among the elderly over seventy-five.

It prevails in two periods of the year: Summer in the northern hemisphere – from May to August – and winter – from November to February.

Due to its form of contagion, there are certain people with certain professions or customs who are more prone to exposure, among them:

Tularemia spreads from animals to humans, and among animals themselves, but never among humans. A sick person cannot infect a healthy person. Therefore, it’s not necessary to isolate patients.

However, among the means of transmission from animals to humans we can mention the following:

Read more: Bats Are the Cause Behind Coronavirus

The incubation period is short, which is the time that passes between contact with the bacteria and the appearance of symptoms. Usually, three to five days is all it takes. In some people, it can take up to fourteen days for the first symptom to appear.

The clinical picture will depend on the place of entry of the microorganism. It may appear with the following varieties:

You may also want to read: What Should You Do About Swollen Lymph Nodes?

Antibiotics are effective in the treatment of tularemia. It’s a serious disease, but it’s entirely curable with timely detection and the proper administration of these drugs.

The antibiotic treatment can be oral or with injections, either intramuscular or intravenous. The drugs of choice are streptomycin and gentamicin. In the case of the oral route is preferred, doctors usually prescribe doxycycline. The professional will decide, according to the clinical picture and the characteristics of the patient, which one is appropriate.

Along with the antibiotic, doctors will prescribe the corresponding support measures for each symptom. They may administer fever reducers, antiemetics, and analgesics. Hospitalization is an option if there is dangerous organ involvement.

It’s assumed that once infected with tularemia, the person becomes immune to the bacteria for the rest of her or his life. This means that they cannot become infected again. However, science has recorded recurrences, so preventive measures are still mandatory for those who suffered from it.

So if you’ve been in environments where rodents are present, you’ve gone hunting, or have performed veterinary or farming work tasks, and after a few days, you start to have a fever or experience any of the symptoms of tularemia, consult a professional for an examination.

Ticks: A Real Danger to Humans and Animals
Ticks are parasites that can transmit disease to humans and animals. Do you know what to do in case you're infected by a tick? What are the symptoms? Read more »
Link copied!
Interesting Articles
Illnesses
Can Celiac Disease Cause Infertility?