Causes and Symptoms of Rosacea

Rosacea is a skin disease that experts still don’t know the origin of. It causes redness and its treatment sometimes requires systemic drugs. Find out more in this article! 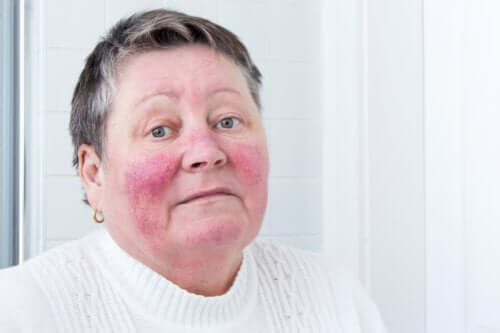 Rosacea is a disease that primarily affects the skin. It isn’t difficult to diagnose and is usually detected early because its symptoms don’t go unnoticed. Below, you’ll discover the causes and symptoms of rosacea.

Experts estimate that rosacea affects 2 out of every 1,000 people every year. This calculation isn’t exact and varies widely between different regions of the world. The truth is that there are no reliable records of rosacea. While some countries report a prevalence of less than 1%, others have come to estimate a prevalence of over 10%.

It’s clear that the disease attacks the skin, causing red areas and visible and swollen blood vessels. In addition, red bumps sometimes appear on the skin.

It affects more women than men, including those with fair complexions. It isn’t very common in children and its peak onset is in adulthood, approximately in the thirties and forties.

Many other diseases mimic the symptoms of rosacea. Thus, medical professionals can become confused and diagnose the patient with other conditions. For this reason, experts established criteria in 2002 that doctors have to abide by to diagnose the pathology.

These diagnostic criteria are classified into primary and secondary. Some of the primary signs of rosacea are:

The secondary signs are:

The causes of rosacea

As we mentioned above, experts still don’t know the real causes of rosacea. It’s possible that genetic issues combine with some environmental triggers to lead to the skin reaction.

Some scientific studies have linked rosacea with allergies, especially elements that float in the air and foods. This doesn’t mean that rosacea is a form of allergy, but that there is a related component in the manifestation of the reaction.

Also, it’s worth mentioning that patients with this skin disease are more likely to suffer from hypertension and metabolic diseases. In women, hormonal imbalance is more common.

Some possible triggers of rosacea are:

Keep reading: 7 Foods to Include in Your Diet to Improve Rosacea

Clearly, the ultimate symptom of rosacea are red spots on the face, usually located in the center. This symptom is accompanied by dilated blood vessels.

The red spots may or may not be accompanied by red bumps. People may confuse it with acne, although it isn’t the same type of skin lesion. Furthermore, the bumps aren’t always filled with pus.

Rhinophyma, which is a condition that causes a red and enlarged nose, is another characteristic symptom of rosacea. This condition is also known as bulbous nose and consists of a thickening of the skin that covers the nose.

Finally, symptoms that affect the eyes are less common. Patients may suffer from the ocular form of the disease, which causes extremely dry and swollen eyelids.

The stages of this skin disease

Rosacea doesn’t manifest in the same way in all patients. The symptoms vary depending on the person who’s suffering from it and the trigger. Age can also affect the course of the symptoms. In addition, it’s important to highlight the fact that the disease has different stages:

We can say that there’s no curative treatment for this skin disease. Medical professionals indicate techniques and drugs to reduce the symptoms and improve the face’s appearance.

The first-line treatment is with creams that contain metronidazole. This is the initial choice in patients in the first stages of the disease. If they don’t work, medical professionals may opt for oral antibiotics (tetracyclines) or also isotretinoin.

For rhinophyma, the patient may opt for carbon dioxide laser, which yields promising results in reducing nasal inflammation. Also, laser and pulsed light may help with telangiectasias (dilated blood vessels).

Thus, while it’s a skin disease that strongly affects the patient’s appearance, we know that treatments are still being investigated. Nevertheless, it’s important to know that it isn’t a dangerous condition. Therefore, it’s essential that you consult a doctor if you have symptoms suggestive of this skin disease.

9 Natural Remedies for Rosacea
To treat rosacea correctly, it's best to go to the doctor and follow their instructions. Natural remedies should never be the first option. Read more »
Link copied!
Interesting Articles
Illnesses
Open-Angle Glaucoma: What Does it Consist Of?