Causes of Dupuytren's Contracture and Treatments

Dupuytren's contracture is a deformity of the hands that limits finger movement and keeps them from stretching completely. Continue reading to find out more about it. 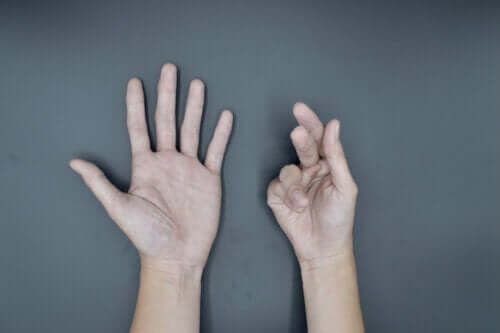 Dupuytren’s contracture is a deformity of the hands and mainly affects finger movement. This disorder disrupts the layer of tissue beneath the skin of the palm of the hand. It progresses over the years and is more common in men after the age of 45.

The disorder affects both extremities in half of the people who have it. Furthermore, the frequency of the right hand is twice that of the left when only one hand is affected.

The contracture limits the movements of the fingers and keeps them from being fully stretched. This complicates daily activities. It manifests in the ring and little fingers, mainly.

Placing hands in pockets, putting on a pair of gloves, and waving are just some of the most limited movements. Today’s article will explain Dupuytren’s contracture more in-depth.

It begins with a thickening of the skin on the palm of the hand. Later, this skin becomes wrinkled and with depressions on the surface. A small nodule may also appear in the same area.

This nodule gets thicker until it forms a band, similar to a cord. It may be tender to the touch but isn’t painful. The formation of the nodule under the skin pulls on one or more fingers, keeping them flexed. This position makes the hand look like a claw.

The specific cause of Dupuytren’s contracture is unknown although researchers believe it to have a hereditary component that mainly affects males.

There’s no evidence that hand injuries recur in the future. It’s also uncertain whether activities or jobs involving vibration can cause them.

Dupuytren’s contracture occurs with varying frequency depending on the genetic load and characteristics of individuals. There’s a higher frequency in alcoholics and those with epilepsy.

This alteration is more common in northern European countries and in people from these areas. In contrast, it’s a rare disorder in Africa and East Asia.

Some of the risk factors for this disorder are:

One of the initial phases of treatment is to keep mild, non-progressing cases under observation. One must consider this initial measure because it doesn’t limit function.

Cortisone injections into the nodule may reduce sensation if carried out before the fingers begin to curve. It’s important to mention that cortisone doesn’t slow progression.

Another treatment option is collagenase injections and their results are quite favorable. Collagenase is an enzyme that dissolves the collagen that forms the taut cord of the palm.

This substance is the production of the bacterium Clostridium histolyticum. One can soften and weaken the fibrous cord by applying the enzyme. It allows manipulation of the hand in order to break the cord and straighten the fingers.

Some European countries use radiation therapy (radiotherapy) and obtain good results. This is because it delays the progression of the disease and the need for a surgical approach. Doctors usually only perform it once.

Find out How to Prevent Arthritis in Your Hands

A person can undergo the puncture technique before surgical treatment. It uses a needle inserted through the skin. The aim is to break the cord of fibrous tissue that contracts the finger.

The advantages are that it doesn’t require a surgical incision and doctors can perform it on several fingers at the same time. After completion, it requires little physical therapy. However, its main disadvantage is that the contracture might reappear.

Physicians reserve this for cases in which the palm of the hand can’t rest flat on a table. Also when the fingers are so curved they limit function or if the disease affects several fingers

The main objective is to surgically remove the tissue affected by the disease. The main advantage of surgery is the results are more complete and lasting than those obtained with collagenase injection or puncture.

In severe cases, it’ll seek to remove all the tissue affected by Dupuytren’s contracture, including the skin attached to the fibrous. A skin graft is, therefore, needed to cover the wound.

The following changes in their activities are recommended for people with Dupuytren’s contracture:

Physical therapy also helps reduce pain and increase the range of motion. The following techniques may be used:

Dupuytren’s contracture can progress unpredictably. It causes deformity and loss of function of the affected hand. For this reason, it’s important to recognize it and maintain adequate medical control.

Cases that require surgery as treatment can be complemented with physiotherapy. This is mainly to reduce the symptoms and improve hand function. The final objective is to increase the mobility of the fingers.

Numb Hands: Why Does it Happen?
Numb hands can be a result of a simple issue, or it can be a symptom of a serious illness. In this article, we explain what you should know. Read more »
Link copied!
Interesting Articles
Illnesses
Swimmer's Itch: Causes, Symptoms and Treatment