Lots of different factors can influence the graying of hair, from stress to genetic factors, even to emotional problems. 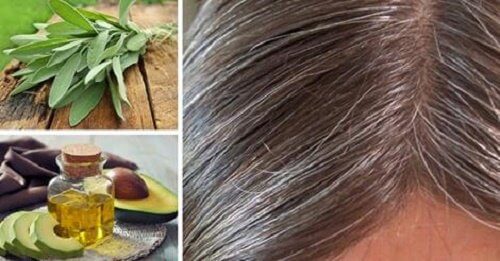 Would you like to learn some natural remedies for gray hair?

If you’re starting to find some gray or silver hairs on your head, don’t let it get you down! It doesn’t mean you’re old. However, until fairly recently, it was thought that having gray hair was synonymous with old age.

Now, however, we know that other factors influence the changing of hair color.

Find out more about this pesky issue in today’s article, where we’ll explain the causes and some natural remedies for gray hair.

Why do Gray Hairs Appear?

Why do gray hairs appear?

They turn up when there’s an accumulation of hydrogen peroxide. When peroxide accumulates, it blocks the synthesis of melanin, the element responsible for giving your beautiful hair its color.

If you’re a woman who bleaches her hair (and men do this, also), you probably already know that peroxide is one of the key ingredients. But your body also produces peroxide…although in very small quantities.

As we age, the body increases that production because it no longer has the needed concentration of the enzyme that breaks down and transforms peroxide into its separate components of hydrogen and water.

In addition to this, your hair can’t repair the damage that this increase in peroxide causes. This is because your production of the enzyme tyrosinase, which produces melanin, also slows.

While age is a major cause of this process, it’s not the only factor. Genetics can also have a lot to do with it, as well.

There are still more reasons for peroxide accumulation and enzyme failure, such as:

What about the relationship between stress and the appearance of gray hairs?

When you were a child, you probably remember hearing your parents say that your antics were going to “give them gray hairs” (or maybe you’ve said that to your own children). It’s always been believed that pressure, too many obligations, and of course stress can cause gray hairs.

Have you every wondered why some presidents (take Barack Obama, for example) start their term with their normal hair color and by the time they leave it’s all turned gray?

While it used to be an old wives’ tale, scientists have now discovered a clear link between stress and gray hair.

Stress can cause many problems in the body, both inside and out. It produces neurotransmitters that can damage the DNA. This can change your hair color. B

However, don’t just blame stress, because there are other factors that cause gray hair:

Pay attention to when your parents began to develop gray hair.

After all, the timing when hair begins to turn gray is determined by genetics. If your ancestors had prematurely gray hair, it’s more than likely that you will, too.

Your diet is related to all the processes of the body. It’s important that you get sufficient amounts of vitamin B12 to avoid having completely gray hair before you’re 50 years old.

Foods that contain vitamin B 12 are eggs, salmon, sardines, and tuna.

In addition, eating too many fried foods and drinking a lot of coffee can actually advance the graying process.

Gray hairs result from certain bad habits like smoking, drinking in excess, and not getting enough exercise. Depression and extreme stress can also cause your hair to turn gray earlier.

In some instances, your hair might return to its “normal” color after the stressful situation is over.

If you have gray hair, you can try the following two natural remedies for gray hair:

Massage your scalp with a little onion juice to slow the progression of gray hair, according to a study conducted at the University of Bradford.

Chop an onion as finely as possible and make a paste out of it, or you can rub half an onion on your scalp.

One of the enzymes contained in onion juice can break down hydrogen peroxide and prevent its accumulation in your hair follicles.

Avocados have medicinal properties thanks to their content of fatty acids. They also contain minerals and vitamin E. Vitamin E is a great moisturizer and an antioxidant, which helps prevent graying.

Gray Hair – Aesthetics and Maturity
Gray hair appears as time goes by. It can be seen as a sign of maturity or personal neglect. Here are some facts about this inevitable phase of life. Read more »
Link copied!
Interesting Articles
Beauty
Spot Corrector Creams: Everything You Need to Know