Causes and Treatments for Neutropenic Fever 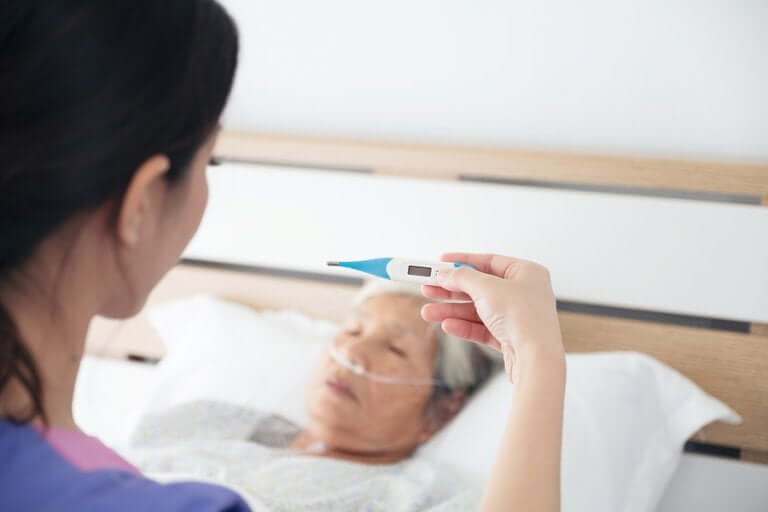 Before we can discuss neutropenic fever, we first have to define what we mean by fever and what neutropenia means. Once we’ve established these concepts, we’ll be able to move forward and learn more about the causes and treatments for neutropenic fever.

Fever is colloquially identified as an increase in body temperature above what is considered normal. World medical associations agree that a person has a fever when their body temperature is above 100 degrees Fahrenheit.

Body temperatures are considered normal up until about 98.6 degrees Fahrenheit. From there up to 100 degrees is known as a low-grade fever. This may be a warning of a fever to come.

Neutropenia is a decrease in the number of white blood cells called neutrophils. World medical associations have also come to a consensus on the definition of neutropenia. It’s less than five hundred neutrophils per one milliliter of blood.

Therefore, if you’re experiencing a high temperature coupled with a very low neutrophil count, you’re dealing with neutropenic fever. This condition is serious because the low number of white blood cells makes it difficult for your body to fight the fever.

This illness requires immediate evaluation and diagnosis, especially since neutropenic fever is common in immunosuppressed people and cancer patients.

It’s important to act quickly to ensure the neutropenic fever doesn’t turn into sepsis. Sepsis is an infection that spreads through the blood, reaching different organs at the same time. It’s a very serious clinical issue that requires hospitalization and treatment with powerful antibiotics.

Who can get neutropenic fever?

Neutropenic fever often affects people with compromised immune systems. A prime example of these cases is with oncological blood and bone marrow conditions.

Oncohematologic diseases such as leukemia are responsible for the actual decrease of neutrophils in the patient’s body. When that happens, infections happen more frequently, which is how patients get neutropenic fever.

Sometimes, it’s not exactly an oncological bone marrow disease that causes neutropenia. Instead, it may be a tumor from another organ. If this tumor produces certain toxic substances, it will affect white blood cell formation in bone marrow.

Also, certain cancer treatments may cause neutropenia. Chemotherapy done with drugs like cisplatin or docetaxel, among others, have the adverse side effect of destroying bone marrow.

Therefore, when a person is undergoing chemotherapy, they may get neutropenic fever. Even though chemotherapy patients are frequently monitored, this side effect is difficult to avoid.

How are patients classified?

Medical science had to develop a way to classify patients with neutropenic fever in order to establish their risk levels. A scoring table called MASCC is the most commonly used tool for this.

Through MASCC, the physician can assign points to certain conditions the patient has to determine if they are low risk or high risk. In the MASCC table, a score greater than 21 indicates low risk and the prognosis for the future is much better.

Generally speaking, a patient with neutropenic fever is at high risk when they have had a high temperature for more than seven days and their neutrophils are less than 100 per milliliter. Their condition could be worsened by:

A high-risk patient, either by the MASCC scale or in terms of general condition, needs to go to the hospital. Once there, doctors should give them antibiotics immediately and without delay.

In low-risk patients, outpatient treatment is possible. In other words, they may not need to go to hospital. They could take the antibiotics orally with regular check-ups, without needing a hospital visit.

Keep reading: Do You Know the Best Natural Antibiotics?

Treatment for neutropenic fever typically involves antibiotics. At first, the doctor may prescribe certain generic medications until they figure out the specific microorganism that’s causing the infection.

This is known as empirical treatment. It’s a broad-spectrum treatment that doctors administer without confirmation of the infection’s origin. There are two options for this: treat it with a single antibiotic or with two at the same time.

Antibiotic treatment will end when the patient goes 48 hours without a fever and has recovered their white blood cells. Doctors will regularly perform microorganism cultures until they’re negative to confirm the antibiotic’s effect.

Remember, if you have any condition that compromises your immune system, and you have a fever, you should see a doctor immediately. You should seek medical attention and treatment right away. Neutropenic fever is life-threatening.

How to Treat a Fever
It’s very important to treat a fever to avoid possible complications. You can try some home measures first then see a doctor if they don't work. Read more »
Link copied!
Interesting Articles
Illnesses
The Symptoms and Treatment of Granuloma Annulare