Care Before and After a Cesarean Section

It's very important to take special care before and after a cesarean section. That way, you can prevent infections and complications for both yourself and your baby. 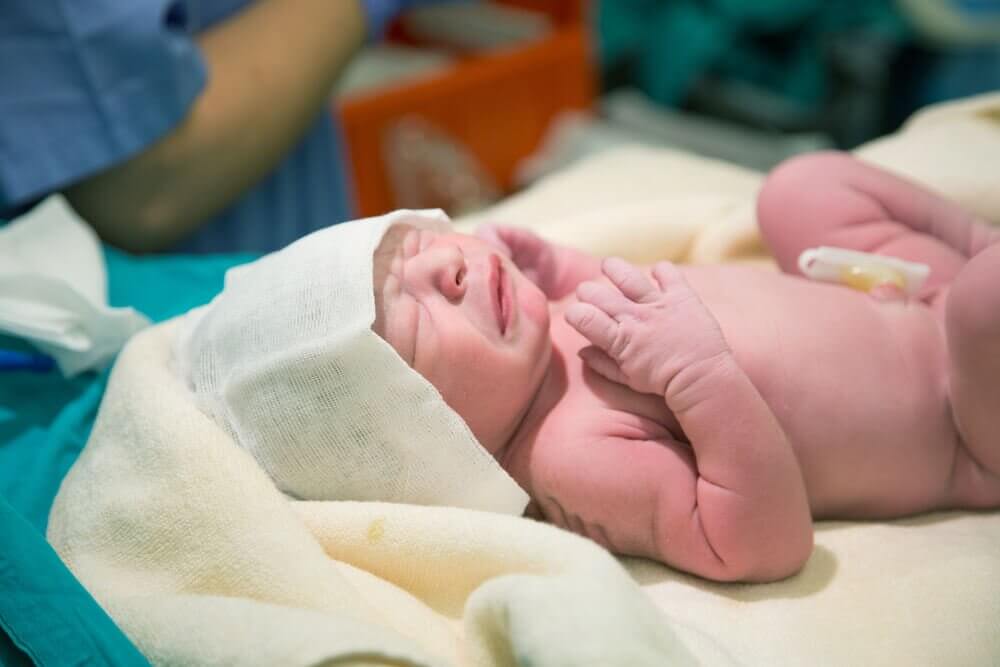 A cesarean section is a type of surgery. It consists of making an incision in the abdomen and uterus to take out the baby. Nowadays, specialists consider cesarean sections to be the safest procedure to prevent or solve possible complications that may happen during a vaginal delivery.

Previously, this operation was only used in cases where the life of the mother was in danger and the baby was still alive. However, doctors started using this technique when having a natural birth was unfeasible.

Nowadays, it’s the most common obstetric surgical operation in developed countries. Over the last few years, the number of cesarean sections has increased considerably.

When Do Women Need a Cesarean Section?

Gynecologists recommend cesarean sections when vaginal delivery can be risky for both the pregnant woman and the baby. Some possible complications can occur if delivery is complicated and long. Women may have an abnormal pelvis, may be exhausted or have uterine malformations.

If the baby is suffering, doctors usually choose to perform the surgery and go forward with a cesarean section.

Another reason might be complications like preeclampsia or eclampsia. Also, they may chose this procedure if there are multiple births or the baby is in an abnormal position, like head up instead of towards the pelvis.

Other reasons for doctors to perform a cesarean section instead of natural delivery may be:

Keep in mind that different specialists have different opinions on when to recommend a cesarean section.

Discover: 7 Tips for Getting Pregnant

Preparations Before a Cesarean Section

The first thing that a mother needs to do before having a cesarean section is understand why they need the operation. Therefore, the responsible doctor needs to explain it correctly.

Then, s/he needs to give the patient a summary of the procedure to mentally prepare the patient. Normally, most cesarean sections follow the same steps.

On the other hand, some mothers decide to request a planned cesarean section. However, it’s recommended that you plan a vaginal delivery unless a cesarean section is completely necessary. That’s why you should keep the risks in mind that come with this procedure.

In addition to the risks, the doctor needs to explain the benefits of the procedure to the patient  when it’s completely necessary. Planned cesarean sections have a lower risk of complications, such as infections.

It’s also necessary to create a plan for your c-section with your doctor. Before undergoing the operation, you need to have the appropriate medical tests before the surgery.

The day before the operation, the woman should try to sleep well. She shouldn’t shave her pubic hair,because it might increase the risk of infection. On the other hand, if the patient has an iron deficiency, the doctor may recommend extra iron, either in food or supplements.

After the operation, the mother is taken to a recovery room where she will spend eight hours lying in bed to rest. Then, it’s better to sit up or sit in a chair.

At first, it’s common to feel strong pains, which doctors treat with pain relievers. Then, they will administer an IV to give the woman nutrients because she can’t eat or drink right after.

Generally, women spend three days recovering at the hospital until it’s time to go home. However, it’s about four or six weeks until they can go back to normal activities.

After a C section, you should avoid lifting heavy objects, since it could cause bleeding. On the other hand, don’t use tampons or douches until the bleeding stops. Additionally, avoid sex. It’s very important to stay hydrated by drinking plenty of water.

If you suffer a fever or abdominal pain after your C section, consult your doctor, because they might be symptoms of an infection.

Is Vaginal Birth Possible After Having a C-Section?
VBAC is a vaginal birth after C-section. It's a valid birthing option only when there are no risks for the mother and baby. Read more »
Link copied!
Interesting Articles
Pregnancy
Do Home Pregnancy Tests Work?