Candida Auris: Everything You Need to Know

Candida auris is a fungus that has medical researchers on edge. Infections happen all over the world, and they're often resistant to the usual treatment. We'll tell you all about it in this article. 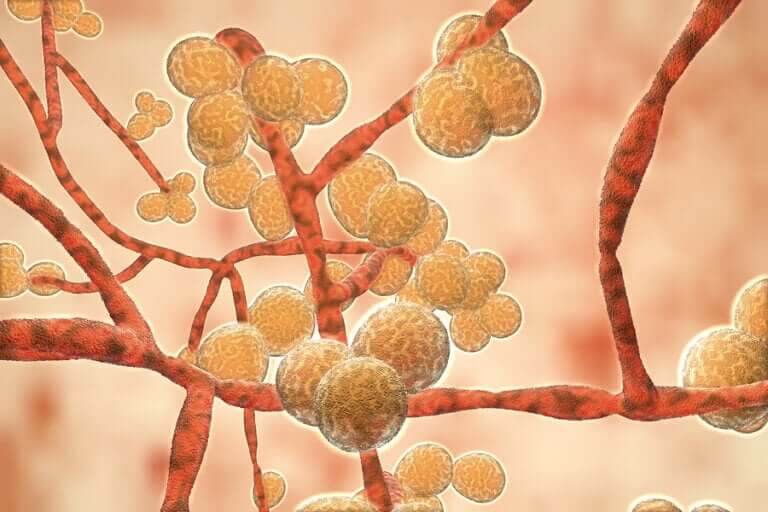 Candida auris is the name of a fungus from the candida family. It’s become infamous in the scientific community because it’s resistant to common antifungals.

This fungus’s outbreaks almost always occur in hospitals or homes for older adults. In addition, they can be very severe, and can even get to the point of sepsis. That is, the spread of infection by the patient’s blood.

Researchers first identified this organism in 2009. In fact, they called it auris since it was in a sample from a patient’s ear canal, a native of South Korea. Then, outbreaks in hospitals raised the alert in 2016 and 2017.

The most serious outbreaks happened in intensive care units. This led to extreme measures to control the contagion. However, they realized that this fungus is extremely resistant.

Researchers assumed that by living in hospital settings, they became resistant to medication. Samples from hospital floors, furniture from clinic rooms and even computers have tested positive for Candida auris.

Cases of Candida auris in the world

After confirming the first case of Candida auris in 2009, the researchers recognized that previous unidentified infections were probably from this pathogen. One case in particular from 2008, also in South Korean, could have been from it.

From there, scientists cataloged cases in India, South Africa, Venezuela, the United Kingdom, Israel and the United States. These last two countries, together with Spain and Colombia, registered it in 2016. In fact, there were varied outbreaks in that year.

Keep reading: Learn How To Treat Foot Fungus With These Home Remedies

Not everyone that comes into contact with Candida auris will get the infection. Also, not everyone will have severe symptoms. Additionally, there are people who carry the fungus in their bodies and never develop symptoms. This is called colonization. Although it isn’t serious for the carriers, they can give it to other people.

The main risk factor for infection is being hospitalized. In addition, you may need a catheter. Other risk factors are:

A surprising feature is its ability to resist antifungal medications. In fact, this worries infectious disease specialists. Hospital outbreaks raise alerts because we don’t know how hard it will be to get rid of the fungus.

Almost all Candida varieties are sensitive to fluconazole. For example, it’s common to treat Candida albicans with this drug. However, Candida auris is resistant to it.

It’s resistant to other anti-fungals, like amphotericin B and voriconazole. According to scientific studies, approximately 90% of the registered Candida auris strains are resistant to one class of antifungals. Additionally, a third of them are resistant to more than two different drugs.

Check this out: Remedies for Fungi: How to Cure it With Natural Ingredients

So far, there’s a special group of medications that can help kill Candida auris. These drugs are echinocandins.

However, these aren’t always available. Also, some strains are resistant to these as well. If this happens, doctors use a mixture of antifungals at higher doses than normal.

Also, these patients previously had a disease that required hospitalization. Therefore, their immune systems were weak.In fact, some had multiple diseases at the same time. The doctors must figure out how to treat each problem.

This critical situation with Candida auris reminds us to be prudent when taking medications. Both patients and doctors need to follow prescription guidelines to avoid becoming resistant to medications.

Control Candida Growth with these 6 Natural Remedies
Although candida is a normal yeast found in the human body, its excessive production can cause complications. Learn how to control candida growth. Read more »
Link copied!
Interesting Articles
Illnesses
What Are Autoinflammatory Diseases?