Can Turmeric Help in the Fight Against Cancer?

The majority of investigators agree that there are still many aspects to explore when it comes to whether or not turmeric can be used to help fight cancer. 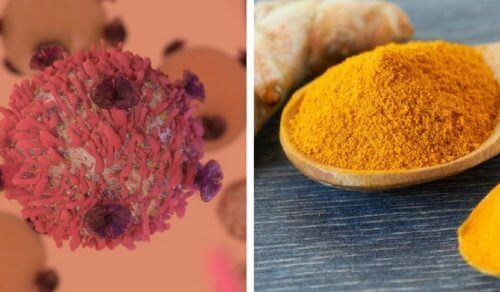 Cancer is an incurable disease. As its exact causes remain unknown, it is a source of huge concern for many people. In light of this, the scientific community is carrying out a variety of different studies to try to throw more light on the subject, improve the range of treatment options on offer and discover new alternatives.

The focus of many investigations has been on the use of plants, foods, spices and drinks that might have the potential to help in the fight against cancer. The key might be hidden in certain compounds and properties.

Turmeric (better known as one of the main ingredients in curry) is one of the plants that has received the greatest attention in relation to this topic.

In this article, we want to take a look at some of their findings.

In a study published back in 2001, investigators carried out a pharmacodynamic and pharmacokinetic study of the use of turmeric extract in patients with colorectal cancer, and came to the following conclusions:

The authors of an investigation published in 2009 explained that the number of clinical studies done on humans was scarce, and as such, it was too early to consider turmeric as an adjunct therapy.

Despite being suggested as a supplement, it’s clear that further study was needed to determine the effectiveness of turmeric in fighting cancer.

In a study published in 2016, it was explained that the lack of clinical studies and reliable evidence means that, for the time being, turmeric is not considered as a viable treatment option. Furthermore, consumption of turmeric could interfere with other drugs.

Can turmeric help in the fight against cancer?

It’s important to bear in mind that, while a number of investigations (carried out before 2009) have indicated that consuming turmeric caused no serious adverse reactions, it’s important to proceed with caution and always consult with your doctor before including it in your diet.

Despite all of this data (for which you will find a full bibliography at the end of this article), investigators have concluded that they need more information and further studies in order to conclusively state whether turmeric can really be used as an effective treatment against cancer.

Should you include turmeric in your diet?

It’s also important to bear in mind that there have been cases in which the consumption of turmeric was in fact counterproductive. Some of the most notable examples include:

Experts from the AECC have written a document in which they explain in a brief, simple and concise way the most common beliefs and myths when it comes to cancer. In it, they explain that no food or natural remedy can help to prevent or cure cancer.

“Until now, experts have recognized that there are certain beneficial compounds, such as flavonoids (…) that have antioxidant properties. But there is no scientific evidence to say that you must consume said products on an exclusive basis; rather, they should form part of a varied and balanced diet, complete with plenty of fruit and veg. This is what makes up a healthy diet.”