Can Hair Fall Out Because of the Keto Diet?

You may have heard that the "keto" diet or calorie restrictions can affect hair loss. Below, we’ll explain whether this is true. 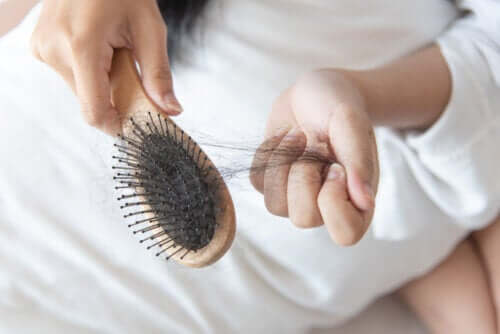 The question has arisen as to whether hair can fall out when people are following the keto diet. This form of carbohydrate-restricting diet has gained popularity, thanks to its multiple fields of application.

It’s an effective dietary guideline when losing weight, controlling diabetes, and even preventing the appearance of other metabolic diseases. However, not everyone has good adherence to it.

Also, there’s doubt about whether restricting carbohydrates could cause alopecia, which is the technical term for hair loss. Below, we’ll discuss whether hair can fall during the keto diet. You’ll be able to weigh up the pros and cons of the diet and decide if it’s a suitable plan for you.

The general reasons for hair loss

Hair loss is a phenomenon characteristic of older people, although in some cases it may begin after the end of adolescence. This process has links to a certain genetic burden.

According to research published in the Journal of the American Academy of Dermatology, it’s possible to experience hair loss resulting from an increase in testosterone production from a certain age. This depends on cellular DNA.

Although genes influence alopecia, it’s possible to slow its progression by varying environmental factors, such as diet. This way, and as an example, we have the areata form of hair loss, which could be delayed if the vitamin D supply is adequate. This is claimed by some studies published in current scientific literature.

Also read: The diseases vitamin deficiencies can cause

One aspect that can induce alopecia is hormonal changes. Using testosterone as a drug to increase anabolism and increase energy could be related to hair loss.

This hormone can influence hair growth, so any unnatural administration modifies the secondary sexual characters. For example, hair distribution on the upper part of the skull and the sides of the forehead.

This is why physioculturists who use anabolic drugs often experience widespread hair and body hair loss. However, the use of these substances doesn’t affect everyone in the same way. There is still a genetic component behind it that can modify that response.

Does diet influence the immune system?

As we have commented, alopecia is determined by a strong genetic component. However, some changes in eating patterns may influence the process for good or for bad. However, there are no conclusive human studies in this regard.

It has been studied in animals, specifically in mice, whether intestinal dysbiosis and vitamin deprivation in group B can change the progression of the disorder. Research published in the journal Cell Reports concluded that deprivation of biotin intake would cause changes in the skin of animals and stimulate hair loss. However, tests in humans would be necessary to confirm such an association.

Learn more: The benefits of vitamin B6

Can hair fall out because of the keto diet?

There’s no scientific article or updated evidence that is capable of linking a ketogenic diet, or a restrictive diet, with an increase in hair loss. Therefore, we can affirm that hair doesn’t fall out during the keto diet.

There are some case reports, which are notifications made by doctors or groups of professionals, about a particular issue that happened and of which there was no record. Concerning the ketogenic diet, one person on this diet reported that they experienced a reduction in their hair density, however, one person isn’t enough to establish a general link.

Hair loss is linked to emotional processes related to stress, hormonal changes that lead to an increase in testosterone production, or even genetic factors. However, caloric or carbohydrate restriction doesn’t seem, for the time being, to have a significant effect on this process.

Hair can’t fall out because of the keto diet

While your hair may fall during the keto diet, it’s not because of it. Hair loss is more strongly related to genetic factors than environmental factors.

Stress and hormonal changes can cause hair loss. The use of anabolic drugs can stimulate such loss, as well as modify other aspects related to appearance and sexuality. However, caloric or sugar restriction doesn’t appear to influence the process.

How to Treat Alopecia Naturally
You should know that there are natural ways to treat alopecia. We share some of the best ones with you in this interesting article! Read more »
Link copied!
Interesting Articles
Diet
Discover the Menopause Diet