Busting the Myths About HIV Transmission

HIV is one of the most feared diseases today. Unfortunately, this has given rise to several myths about HIV transmission. Read on to discover more about them. 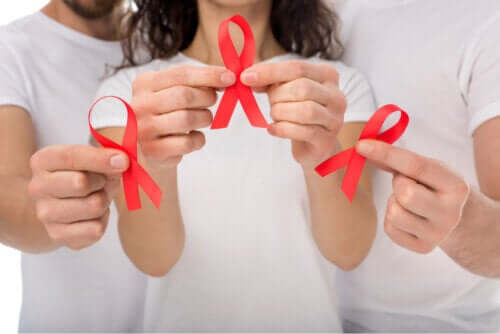 The human immunodeficiency virus (HIV) is a disease that has claimed the lives of millions of people. This virus attacks the host’s immune system and prevents it from doing its job properly. As a result, infected people are more likely to suffer from a variety of diseases, infections, and complications. The fear of contracting this disease has given rise to many myths about HIV transmission.

The human immunodeficiency virus (HIV) is one of the most studied illnesses at present. Although there’s still no cure, researchers have made several advances in this area. Over the years, they’ve discovered new modes of transmission, and also innovative ways to avoid them.

However, despite all the research and the advances that experts have made, ignorance about the disease still prevails. Because of this, there are some myths about HIV transmission that people believe to be absolute truth. Which are the most common?

Here are some of them.

1. HIV can be transmitted through contact with an infected person

This is one of the most common myths about the disease and, unfortunately, one that most affects those who suffer from it. In fact, studies show that between 57% and 77% of women with the disease have suffered from discrimination.

Research has clearly shown that there are only 5 mechanisms of transmission. These are as follows:

So, the virus can’t be transmitted by hugging, touching, or sharing personal hygiene items with an infected person. In fact, you can even kiss someone who carries the virus without running any risk, as saliva doesn’t carry a viral load.

The only risk here is if there are sores, wounds, or bleeding gums in the mouth. If so, you should be very careful.

2. HIV is only transmitted by homosexuals

Without a doubt, this is one of the most curious myths about HIV transmission, as, more than 30 years ago, people considered it to be one of the irrefutable truths regarding this disease. When the virus first came to light in the early 1980s, it was only homosexual men who suffered from it.

However, over the years, experts determined that both heterosexual men and women could also carry the virus. It has even been reported that, in places such as Africa, the Caribbean, and South America, sexual transmission is the main way of contagion among heterosexuals.

Although in Europe and the United States, sexual transmission is greater among gay or bisexual men, it isn’t t limited to this group of people.

3. Myths about HIV transmission: Mothers always transmit the virus to their children

The claim that infected mothers will always transmit the virus to their child is another myth that must be dispelled. While it’s true that mother-to-child transmission is proven by science, it’s also true that there are methods of prevention.

Mother-to-child transmission is possible during the prenatal, perinatal, and postnatal stages. Still, mothers can prevent it with a combination of a healthy diet and antiretroviral treatment before the woman gives birth. In fact, several techniques have been perfected to reduce vertical transmission to below 1%.

With all these measures, the child will have a safe birth and will be as healthy as any other child. In addition to this, with adequate control, women can have healthy families, even if they’re carriers of the virus.

4. The virus is not transmitted by oral sex

As we already mentioned, saliva cannot hold the virus. Because of this, many people believe the myth that HIV can’t be transmitted through oral sex.

Although it’s more unlikely, transmission through oral sex is possible. Saliva doesn’t contain the virus, but vaginal fluids, semen, and pre-seminal fluid have a high viral load. Therefore, during oral sex, the transmission is possible, especially if there are wounds in the oral cavity.

5. Myths about HIV transmission: HIV can be transmitted through mosquito bites

Currently, several species of mosquitoes, such as Aedes aegypti, transmit various pathogens. Diseases such as dengue fever and malaria are caused by this route. Because of this, some people believe that we can get HIV in this way.

However, mosquitoes can’t transmit the virus. Even if they ingest blood from a sick patient, the virus is unable to multiply and survive inside the patient.

Be sure to read: Weakened Immune System: What to Look For

Information is key to dispelling myths about HIV transmission

HIV advances are still in progress. Even so, there are myths about the disease that are still prevalent in society. So, if there’s any doubt about it, it’s best to seek information from professional sources.

Both physicians and health care providers can help resolve concerns that arise from a positive diagnosis. Also, they can provide guidance on treatment options.

HIV/AIDS Vaccine Soon to Be Tested
HIV/AIDS continues to be one of the main public health issues in the world. According to data from the World Health Organization (WHO), it has claimed the lives of at least 35 million people. Read more »
Link copied!
Interesting Articles
Illnesses
Hepatitis in Children: What You Need to Know

Interesting Articles
Anatomy and physiology
Find Out Why We Faint