Bronchiolitis in Babies: What Should We Know?

Different respiratory infections and even allergies can generate alterations in the respiratory tract in children. Bronchiolitis has particular characteristics and generally affects babies and young children. Learn more about bronchiolitis in babies in the following article. 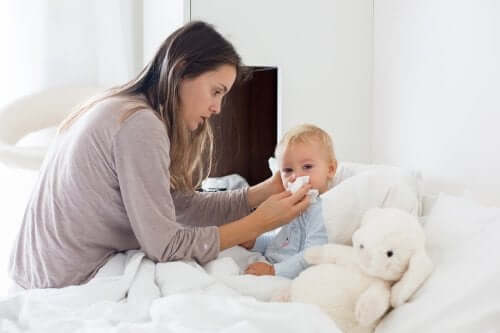 The arrival of the autumn and winter seasons at different latitudes is a concern for both families and health professionals. The reason in general is the increase in the appearance of respiratory diseases. The younger the age of the child who acquires bronchiolitis, the greater the concern, and even more so in the case of babies.

Bronchiolitis is a disease of the respiratory tract that occurs when bronchioles (the smallest and final part of the bronchi) become inflamed due to an infection, usually of viral origin. Thus, these canaliculi develop edema and increased secretions that can produce breathing difficulties.

According to information on the website of the Spanish Association of Pediatrics, the appearance of bronchiolitis is more frequent in babies under one year of age. What’s more, it represents 18% of all pediatric hospitalizations. Generally, the respiratory syncytial virus (RSV) is the most common trigger, but adenoviruses and flu viruses can also be responsible.

What is the most common form of the illness?

After a brief incubation period, manifestations similar to those of a common cold may appear. Therefore, symptoms include sneezing, watery nasal discharge, coughing, and episodes of moderate fever.

Progressively, the cough becomes more persistent and what seemed to be an unimportant illness ceases to be so. Irritability, refusal to eat, increased frequency, and difficulty breathing may occur. As for this final symptom, it’s of increasing intensity, generally reaching its maximum expression within 24 or 48 hours. This is the moment when most of the hospital admissions take place, and then improve gradually.

You may be interested in: Hypothermia in Children: What to Do

“Most are mild forms and the symptoms disappear in less than a week, although the cough, which is the last symptom to disappear, can persist for up to 3-4 weeks”.

What should we do when the first symptoms of bronchiolitis appear in infants?

In this sense, Dr. Ana Maria Balanzat, head of the Department of Pediatrics at the Clinical Hospital in Buenos Aires, Argentina, pointed out that:

“The critical aspect of the pathology occurs when the disease progresses and the lung can’t fulfill its basic function of oxygenation, which can even lead to respiratory failure.

The lack of oxygen in blood and tissues and the accumulation of carbon dioxide can endanger the life of the ill child. “In these situations, hospitalization and oxygen administration are required,” she explained.

Bronchiolitis generally affects infants and very young children. Therefore, it’s important to consult a health professional early on to assess the child’s condition, breathing, hydration, and the presence or absence of fever.

Another element that’s worth highlighting is to avoid areas where there’ll be cigarette smoke, and environments that are highly polluted. As a study published in the medical journal BMJ Open concluded, “in the context of exposure to air pollution, smoking causes additional loss of lung function and exacerbates respiratory symptoms.”

Therefore, it’s important to carry out periodic follow-up visits after treatment has been instituted to watch for possible complications. This is true whether or not the evolution of the illness is as desired or expected.

Symptoms and Treatment of Adenoiditis in Babies
Adenoiditis in babies is a pathology characterized by an inflammation in the size of the adenoids -- the mass of lymphoid tissue near the nostrils. Read more »
Link copied!
Interesting Articles
Illnesses
Eczema and Stress: How Are They Related?