Breaking the Myths Regarding Gluten

There are numerous myths regarding gluten that have caused millions of people to restrict products rich in this protein without having a related disease. Discover the myths and take on false marketing. Not everything you've heard about gluten is true! 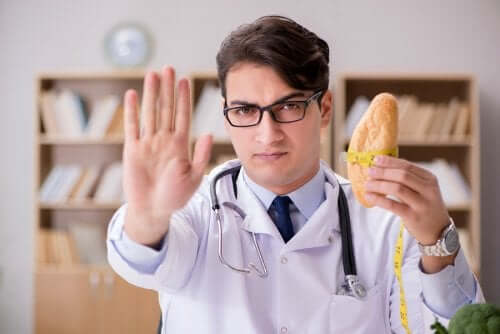 Today, the only treatment for gluten-related disorders is absolute dietary restriction. However, in general, there’s a trend among the population toward a gluten-free diet without any real foundation. In that sense, have you identified the myths regarding gluten yet?

So much has been said about this protein, present in foods like wheat, that some claim that eliminating it improves health and contributes to weight loss. In fact, some even go so far as to say that its ingestion is toxic to people. Therefore, we need to dispel those myths regarding gluten that society and marketing have imposed on us.

To begin, it’s important to review the meaning of gluten. Wheat is one of the whole grains with the greatest production and consumption at a world-wide level. This is thanks to its nutritional contribution and chemical properties.

It consists of two main proteins: Gliadin and glutenin (mainly known as gluten). However, there are proteins present in other whole grains such as rye (secalin) and barley (hordein) that present similar functional chemicals and functions, as well as interactions within the organism.

Discover: Learn All About Gluten Intolerance

Some scientific articles refer to these proteins as key elements within the food industry. That’s because they provide viscosity, elasticity, and allow water absorption in baked goods. They also provide important organoleptic characteristics to products such as pasta, meat, ice cream, and dressings.

Although gluten has multiple functional properties, there are adverse effects that its consumption produces in certain individuals. The evaluation of diets that exclude these proteins has demonstrated historically and consistently that wheat and other related proteins are common factors that induce symptoms and gastrointestinal damages in vulnerable populations.

Since it’s a protein that interacts with genetic and environmental factors, it’s important to know how it interacts with the body, possible alterations, and related diseases. That way, we can dispel the myths regarding gluten that lead to non-medical diagnoses and unnecessary changes in diet.

Diseases that have to do with gluten consumption

Health disorders that have to do with gluten consumption are defined by the adverse reaction regarding the immune system or other mechanisms, after its ingestion, as research in Critical Reviews in Food Science and Nutrition states. Among them, the most common are:

To begin with, celiac disease is an autoimmune intestinal pathology that’s produced by exposure to gluten and other related proteins. It also has to do with the interaction of genetic and environmental factors. The overall prevalence of this disorder is only 0.5-1%, according to experts.

Based on determinants in the major histocompatibility complex, this disease is associated with an inflammatory response (mediated by pro-inflammatory cytokines and special T lymphocytes) in the face of gluten consumption. This in turn produces intestinal damage in a genetically vulnerable population.

By generating damage in the intestinal mucosa, gluten consumption alters the villi responsible for the absorption of macro and micronutrients. Therefore, it produces serious problems when it comes to the individual’s nutrition.

Its diagnosis is complex since celiac disease shares many symptoms with other diseases. That’s why diagnosis requires serological tests to detect immunoglobulins and specific antibodies. At the same time, the patient will need a duodenal biopsy to confirm or discard the disease. Among the main symptoms are the following:

Allergy to wheat and other proteins

This is a response mediated by type E immunoglobulins to the consumption of insoluble gliadins that are present in wheat. An estimated 0.4% of the world population is allergic to wheat, infants being the main group.

Again, the symptoms of this type of allergy are easy to confuse with those of other disorders and diseases. They include vomiting, abdominal pain, diarrhea, digestive bleeding, asthma, cough, laryngitis, rhinitis, conjunctivitis, hives, edema or inflammation, atopic dermatitis, and anaphylactic reactions. Therefore, serological tests are again essential to measure specific immunoglobulins for allergens present in wheat.

Non-celiac gluten sensitivity: Is it a disorder?

The definition of this disorder continues to be a debate since the damage that occurs is low in comparison to the two previous disorders. Therefore, it doesn’t produce permanent intestinal damage. Intestinal sensitivity occurs after the ingestion of gluten or other proteins present in wheat. However, it doesn’t involve immune mechanisms.

For each of these disorders, the only treatment that improves the symptoms and prevents nutritional deficiencies is the gluten-free diet. A medical specialist and nutritionist must guide patients regarding the best way to approach this diet.

You may be interested: The Autoimmune Protocol (AIP): What Does it Involve?

Myths regarding gluten and diet

Currently, the gluten-free diet has gained popularity, even though gluten-free products are more expensive. First of all, it’s important to emphasize that a gluten-free diet is necessary for patients with celiac disease because even small amounts of gluten can cause severe damage to the intestinal mucosa.

Also, this treatment contributes to improving the clinical symptoms in patients with allergies and sensitivity to gluten or other related proteins. Therefore, it’s important to identify the products that contain gluten naturally:

Gluten may also be hiding in the following products:

As a result, and to avoid problems associated with the myths regarding gluten, the food industry today offers products that guarantee their absence. Patients who require a gluten-free diet should only choose products that read “gluten-free” on their packaging.

Beware of gluten myths and fads

Gluten can indeed produce damage to the health and nutrition of people who are genetically susceptible to disorders inherent to its consumption. However, joining the gluten-free trend without medical justification can produce alterations to your health.

There are myths about gluten that claim that its exclusion contributes to weight loss, but this isn’t true. Also, many commercial gluten-free products have a high contribution of sugars and fats. Therefore, their excess consumption can actually produce a significant increase in body weight.

According to the World Health Organization, in Spain, six out of every hundred consumers include gluten-free products in their diet and have health conditions. Eliminating this protein from your diet without medical guidance can produce important intestinal alterations.

Finally, if you don’t present characteristic symptoms and no doctor has made a clinical diagnosis, avoid falling into the marketing traps, believing myths regarding gluten. Unless a doctor indicates otherwise, you shouldn’t remove gluten from your diet.

Why are Gluten-free Diets Harmful?
Gluten-free diets can cause mineral and vitamin deficiencies. Learn about other related problems in this interesting article. Read more »
Link copied!
Interesting Articles
Nutrition
The Reasons Why Some People Are Always Hungry