Are you trying to quit smoking? Learn about a new study that looked at why it's so difficult for some to quit and discover some helpful tricks to help you! 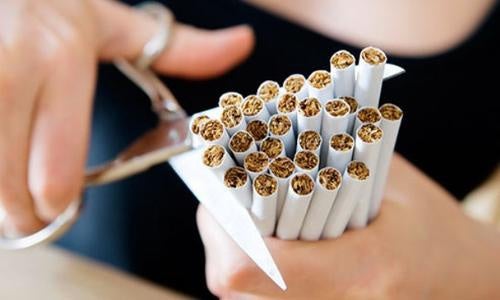 A recent study on smoking cessation habits published in JAMA Psychiatry has made some very important developments.

In this investigation, researchers discovered that the possible strength or weakness of our brain-inhibiting mechanisms determine how easy or difficult it is to stop smoking.


Smoking is automatic behavior and can only be controlled (and also inhibited) by certain brain circuits.

These circuits are disrupted and fail to work properly in many smokers.

Someone who smokes a pack of cigarettes a day has turned this habit into something repetitive and mechanized. In short, it’s something that they need to do because their brain is used to this behavior.

And this goes far beyond addiction to nicotine or other substances found in tobacco.

One finding of the study is that the lower the blood oxygenation level of the inhibition control circuit, the greater the probability that the person will resist the temptation to smoke.

Thus, there are significant neurobiological determinants that can explain why some smokers have more difficulties giving up smoking.

Based on these data, scientists can analyze the possible potential of different treatments. They can determine whether they’re pharmacological or based on behavioral changes.

These therapies could aim to reinforce the communication in the inhibition control circuit of smokers. This, it can help these people to stop smoking.

Details of the tests

At the start of these investigations, specialists examined the inhibitory control networks in the brains of several smokers.

These people were dependent on nicotine and committed to trying to stop smoking with a program that lasted several weeks.

At the beginning of the program, researchers used functional magnetic resonance imaging (fMRI) to monitor brain activity. At the same time, the patients who wanted to stop smoking carried out inhibitory control tasks.

Participants in the study had to press a key on the computer each time a colored circle appeared on the screen.

Responses related to blood oxygenation indicate that the brain used more resources to inhibit the automatic response of pressing the key when the “rare” circle appeared.

Conclusions of the studies to stop smoking

After two months, 50% of the participants who wanted to quit smoking were able to quit.

Patients who failed to give up this habit had similarly good scores on the of inhibitory control task as those who successfully quit smoking.

However, one conclusion of the study was that this group’s automatic behavior was very strong and very assimilated.

In sum, these tests reaffirm that biological differences can help explain why some smokers who are trying to quit are more successful than others.


The first step to stop smoking is to identify the times when there’s a greater chance of you smoking.

Could this be in the morning, after eating or having sex, or when driving?

It also works to ask for help from your family, friends, and co-workers.

You have to change your daily habits and schedule. This will greatly help you to stop smoking.

For example, you should eat at different times, eat several small meals rather than large meals, change your room or your furniture, etc.

Exercise is always positive, especially when it comes to quitting smoking. In addition to reducing anxiety and stress, it creates a sense of physical and mental well-being that reduces the need for smoking.

Finally, we hope you liked our article, for more information on quitting smoking click below!