Here is some information on brain aneurysms. We'll tell you what they are and and explain the symptoms to you in this article. 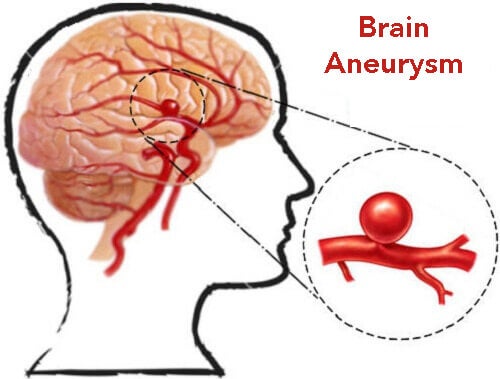 Brain aneurysms – you may have heard people talk about them or perhaps you or a relative have even experienced one. They are small blood vessels that get inflamed in the brain and put dangerous pressure on it. It’s important to know what these are because of the danger they present. Fortunately, some percentage of your risk for getting them is related to your lifestyle habits, so you do have a certain amount of control here.

1. What is a brain aneurysm?

The word itself might scare you, but don’t jump to fatal conclusions. Most of the time, physicians can deal with this condition with timely intervention. The most important part is knowing about them, identifying the symptoms, and trying to lead a healthy life. Let’s dig deeper into  what these are.

A brain aneurysm happens when a vein in the brain fills up with blood and creates pressure at the same time. They normally tend to happen in the lower area of the brain. If a doctor doesn’t catch them in time, they could cause serious issues. If someone doesn’t deal with these, one or both of two things could happen: this pressure might cause irreversible damage, or the blood vessel could end up bleeding.

2. But what causes a brain aneurysm?

Is there an obvious origin that can be determined in order to prevent them? The answer is “yes and no”. Most of the time, it’s an innate pathology. In other words, you can be born with this small blood vessel already inflamed in your brain. The other possibility is that your brain aneurysm is related to other diseases, such as those in the kidney, circulatory system, veins, or arteries.

Infections, high blood pressure, head injuries, and certain types of cancers can increase your risk of getting these. They do this by causing these small, but dangerous accumulations of blood in your brain, which interrupts proper blood flow.

3. Who has a higher risk of suffering from a brain aneurysm?

Adults between 30 and 60 years of age have a higher risk than younger people for aneurysms. The statistics also say that women have a greater risk of suffering from one than men.

These blood vessels are considered serious when they are 15mm in size in the brain, causing a potential risk of them starting to bleed and consequently cause a greater pressure on the brain. This would be when the true risks come about. When they burst and bleed inside the brain, a cerebrovascular accident can happen, which could cause new aneurysms.

4. What are the symptoms?

Unfortunately, many brain aneurysms show no symptoms until they are very large or they burst. If they are small, or in in numerical terms, are less than 10mm in size, they aren’t concerning at all. But if they’re bigger than that or growing, then you may start to feel their effects.

What are those effects? How can you know if you have an aneurysm that is about to burst? You will notice pain behind and above your eyes, weakness or paralysis on one side of your face, and dilation of your pupils.

Some of the common symptoms associated with an aneurysm that has started to bleed will be slightly different: sudden and intense headaches, waking up with double vision, nausea, neck pain, and fainting. Other signs are drooping eyelids, increased sensitivity to light, the inability to concentrate normally, convulsions, and extremely severe headaches. If you have such strong symptoms, you should go see a doctor right away.

5. How are brain aneurysms diagnosed?

To check if you have an aneurysm, you will need to get a CAT scan or an MRI. Sometimes, aneurysms are caught accidentally while doctors are checking the patients for other diseases.

6. How are brain aneurysms treated?

First, we should mention that every patient is unique. Depending on your personal factors and the size of the aneurysm, your doctors will choose something. They will usually use both techniques.

The first way is microvascular clipping, where they try to cut off the blood flow from the aneurysm. The neuroscientist accesses the blood vessel that supplies the aneurysm in the brain. He or she then puts a small, metallic clip, similar to clasp, in the neck. This can prevent the aneurysm from returning.

For the other technique, doctors don’t go through the brain at all. Instead, they use endovascular embolization. What the doctor does is put a catheter through the groin artery. This will then reach the aneurysm through a platinum wire. It will block it there and the problem will be solved.

Today, medical technology is very advanced and you shouldn’t be scared. Doctors are often able to treat aneurysms without any problem. We just have to be aware of the symptoms.

5 Facts About Trigeminal Neuralgia, the Worst Pain in the World
Have you heard of or do you know someone who suffers from Trigeminal Neuralgia? Learn more about this painful condition in this article. Read more »
Link copied!
Interesting Articles
Illnesses
Swimmer's Itch: Causes, Symptoms and Treatment