Bleeding during pregnancy is one of the many complications there can be, and it's often a cause of concern for any future mother. For this reason, it's convenient to know why it happens and to pay attention to it. 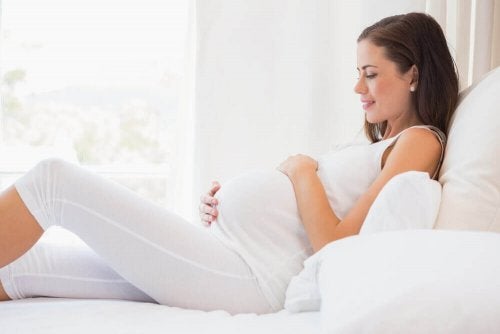 Bleeding during pregnancy is a lot more common than you may think: 50% of women have vaginal spotting at some point. However, this doesn’t always mean that such abnormalities could harm the baby , even though it’s certainly a concern for most pregnant women.

Depending on the stage in which bleeding during pregnancy occurs, it could be a symptom that you should attend to, however. The amount of blood released, and other risk factors such as the age of the woman, are also a factor.

However, being knowledgeable about this subject will help you handle every situation in the manner it deserves. Also, the best option is, as usual, to consult a specialist immediately.

There are two versions of this condition: heavy bleeding and minimal spotting, and both could happen at any time during pregnancy.

What Does it Mean to Bleed During Pregnancy?

Bleeding during pregnancy may occur for various reasons. Mainly, it depends on the stage at which it happens:

Bleeding During the First Trimester

Bleeding during the first trimester is usually due to the implanting of the embryo in the uterus. At the moment of conception, the fertilized egg reaches the endometrium, consequently producing some blood stains.

Mild spotting could last over a couple days and, usually, occurs during the days in which the menstrual would take place if there wasn’t a pregnancy. Also, bleeding could be due to normal, hormonal changes at this stage. Cramps, abdominal distension or expansion of the abdomen, and discomfort in the area of the pelvis may also occur.

Furthermore, bleeding during pregnancy in the first trimester could also be due to an ectopic pregnancy. That is when the ovum becomes implanted outside the uterus, usually in the fallopian tubes. Symptoms associated with it include severe pain in the abdominal area, nausea, and dizziness. It’s a condition that should be treated immediately.

Sexual intercourse is another cause of bleeding during pregnancy, and it’s often the most common cause. In general, sex doesn’t cause injuries and so it mainly happens due to increased blood circulation in the genital area.

Read this article: What to Eat While You’re Pregnant

Bleeding during the second and third trimesters could be due to cervical problems. Any uterine ruptures must be attended immediately. In any case, bleeding in these stages are a symptom of complications, so seek immediate medical attention.

Uterine fibroids, which are benign muscle tumors, may also be an issue. These are present both inside and outside the wall of the uterus and don’t interfere with pregnancy in some cases.

Placenta previa, when the placenta attaches inside the uterus but near or over the cervical opening, may also cause bleeding. This anomaly usually produces painless bleeding and, in some cases, may require absolute rest.

Vaginal infections and preterm birth -usually before the 37th week- are other frequent causes of bleeding during pregnancy.

Read this article: Can Crying During Pregnancy Affect Your Baby?

What’s the Treatment for Bleeding During Pregnancy?


It’s important to seek medical attention as soon as possible in any of the above situations, but remain calm.

Avoid the use of tampons if bleeding during pregnancy occurs. If it’s abundant, there’ll be clots and it’ll also be accompanied by abdominal and back pains.  Do a more thorough examination to determine the cause.

In most cases, rest is the best treatment for bleeding during pregnancy. Relaxation is vital throughout this type of crisis and it’ll be, most likely, the advice you’ll obtain from a specialist.

Depending on the diagnosis, medical advice could also include medication to treat bleeding. Also, in the event of vaginal infections like candidiasis, chlamydia, herpes, etc, they would also prescribe one for topical or oral use.

Medical indications will vary according to each particular case. Some conditions may require a physical examination, an ultrasound, or both an ultrasound and blood tests. It’ll all vary depending on the stage of the pregnancy and other factors.

Bleeding during pregnancy may be harmless, but it’s always a good idea to consult any symptoms with your specialist, especially those that don’t seem to be normal. Experts in the subject are always the best people who can evaluate your individual case and offer you the best alternatives for it.

Four Tips to Make Your Baby Happy During Pregnancy
Believe it or not, you can make your baby happy during pregnancy. Talking to him/her, playing, listening to music and even eating will strengthen your bond. Read more »
Link copied!
Interesting Articles
Pregnancy
Do Home Pregnancy Tests Work?