Attention-deficit/hyperactivity disorder or ADHD is more common in boys than girls. Read all about it in this interesting article! 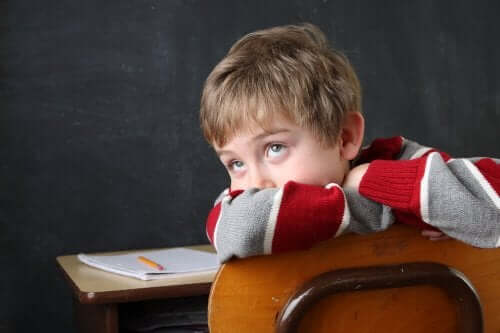 As its name suggests, attention-deficit/hyperactivity disorder or ADHD is a neurobiological disorder that manifests during childhood. Overall, it affects more than 5% of children worldwide and more than 6% of children in Spain. Moreover, it’s more common in boys than in girls.

Fortunately, studies have shown that the disorder may respond well to an early diagnosis and proper treatment. Now, let’s learn more about this disorder!

Due to this disorder’s complexity, no single cause has been identified. Essentially, it’s a heterogeneous disorder with several subtypes that results from various risk factors.

Professionals don’t know exactly what causes it. However, they’ve discovered that genetic and environmental factors have a great influence on its development. In this case, we’re talking about prenatal, perinatal, and postnatal factors.

Furthermore, ADHD has a heritability of 76%. This means that, on average, 76% of the factors associated with the disorder are related to genes and the rest to non-genetic factors.

Finally, it’s been shown that the relatives of people with this neurological disorder have a five times greater risk of developing it than those without a family history of this condition.

This article may interest you: Childhood Influences the Development of Personality

Typically, children who suffer from ADHD may have poor school and social performance.

Essentially, this disorder has three core symptoms: inattention, hyperactivity, and impulsivity. These symptoms manifest themselves in a greater or lesser degree depending on the sub-type.

Next, for the symptoms of inattention, hyperactivity, and impulsivity to be associated with attention-deficit/hyperactivity disorder, certain conditions must be met:

How Can it Be Treated?

First of all, psychological therapy helps control the symptoms of this disorder and improve the child’s performance.

However, attention-deficit/hyperactivity disorder in children and adolescents should be treated according to each patient’s needs. There’s still no cure for ADHD. Therefore, treatment aims to improve symptoms and reduce the risk of other associated disorders.

Overall, the psychological interventions that have yielded good results are based on the principles of cognitive behavioral therapy.

Next, psycho-pedagogical intervention is a fundamental pillar in combined treatment.

Basically, this involves a series of interventions. These range from improving the child’s academic performance to improving the school environment.

Next, pharmacological treatment helps reduce the core symptoms of attention-deficit/hyperactivity disorder. Overall, this can lead to improved academic performance and behavior.

At the same time, it enhances the effect of psychological and psychoeducational interventions. Methylphenidate, which is a stimulant, is a popular drug that doctors prescribe to treat this disorder.

Read: Pay Attention: These Traits Could Indicate that Your Child Has Learning Difficulties

The Reality of Attention-Deficit/Hyperactivity Disorder

This disorder can affect a child’s self-esteem.

This condition is common. However, the reality is that there’s widespread ignorance about it.

Unfortunately, very few people are well-informed about his disorder. In addition, many others mistakenly believe that ADHD is caused by a disorganized family or school environment.

Not having enough information on this disorder has direct consequences on patients and their families, friends, and the other people around them. Misinformation or lack of information leads to stigma, insensitivity, and lack of consideration for the disorder.