Asthma during pregnancy is a risky situation for the mother and the fetus. It must be consulted with obstetricians from the very first moment 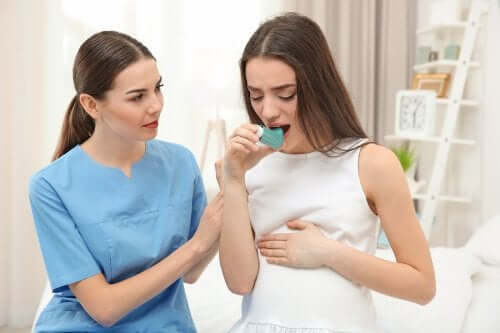 Asthma during pregnancy is a risky disease for both the fetus and the mother. Specialists estimate that between 3 and 6% of the world’s population has asthma, making it a very common occurrence.

Asthma consists of a blockage of the smallest parts of the airways. This obstruction makes it difficult for the body to perform respiratory mechanics, especially when exhaling, and the cause is the inflammation of the small bronchi.

Among pregnant women, asthma is the respiratory disease that most often complicates a pregnancy, as noted in this study published in the Spanish Journal of Allergy and Clinical Immunology. According to statistics, between 4 and 7% of pregnant women have complications associated with asthma at some stage of pregnancy, although they’re very unlikely to appear during delivery.

The worst moment of the pregnancy for asthma is usually between 17 and 24 weeks of pregnancy. This is at the end of the second trimester. During this period, specialists have recorded a noticeable increase in pregnant women who seek emergency services for this issue. On the contrary, the least number of visits for asthma are in the last month before delivery.

Consequences of asthma in pregnancy

If the pregnant asthmatic isn’t properly controlled, complications may arise in the mother’s health. The most serious situation is the lack of oxygen. The oxygen that the mother has circulating in her blood is the one she shares with her baby, and the decrease in her income will affect both of them.

As evidenced by this research published in the Asthma Journal, asthma in pregnancy can cause the following in the mother:

And in the baby, pregnancy during asthma can cause:

For more information read: Epilepsy and Pregnancy: Everything You Should Know

Medication for asthma during pregnancy

During the pregnancy, it’s important for you and your professional to determine which medication you can take according to your needs. Not all medicine is safe for the mother and the baby. Therefore, medical advice is essential.

For asthma, most medications have proven not to be harmful to the pregnant woman. In fact, it’s assumed that uncontrolled asthma during pregnancy is more dangerous than the possible adverse effects of the medication the mother-to-be may take. This is even pointed out by this article published in the Colombian Journal of Pneumology.

In some asthmatic people, desensitization injections are used for allergies in order to reduce the episodes of asthmatic crisis. If the pregnant woman started these injections before she became pregnant, then she should continue them. But it’s contraindicated to start them once the pregnancy starts.

Once the baby is born, there aren’t problems with breastfeeding. Moreover, specialists encourage asthmatic women who have recently become mothers to keep taking their medication while they’re breastfeeding.

How to prevent complications

There are basic steps that women with asthma in pregnancy can take to reduce their risks. This is always accompanied by professional advice and appropriate medication as determined by the doctors.

Here are some preventive measures you should take into account:

About asthma during pregnancy

Asthma during pregnancy carries significant risks for both mother and fetus. Therefore, if a pregnant woman has asthma, it’s important to consult a doctor and follow the recommended treatment. In addition, it’s advisable to be aware of any symptoms that indicate a complication.

Skin Changes During Pregnancy
Hormonal changes that occur during pregnancy often lead to skin changes. Although most are benign, it's important to take special care. Learn more in this article! Read more »
Link copied!
Interesting Articles
Pregnancy
How to Treat Cystitis During Pregnancy with Home Remedies

Summer pregnancies can cause certain fears and uncertainties for many women. They ask themselves what consequences the hot summer temperatures…

How can you manage stress during pregnancy? Without a doubt, pregnancy is one of the most wonderful stages a woman…

Pregnancy
What Does An Ectopic Pregnancy Involve?

Ectopic pregnancy is a pathology that requires early diagnosis and treatment to avoid putting a woman's life at risk. If…

Pregnancy
Birth Defects: What They Are and How to Prevent Them

Birth defects are genetic or physical anomalies that occur while the fetus is developing in the mother's uterus. In order…

Pregnancy
Pregnancy in Summer: How to Cope with High Temperatures

Summer is approaching for many countries, and we need to get ready for heatwaves. Most of us are having the…

A periodontal disease is one that affects the gums. In this article, we'll focus on the risks and repercussions of…

Illnesses
Characteristics of Canker Sores in the Throat

Did you know that sweet potatoes are a food that has various nutritional properties? If you're one of those people…

Nutrition
Discover the Different Types and Varieties of Plums

Can you identify all the different types and varieties of plums? Most people have eaten this fruit at some time.…