Arthroscopy can be used to treat ligament and tendon injuries, or even for certain bone fractures. Learn more in this article! 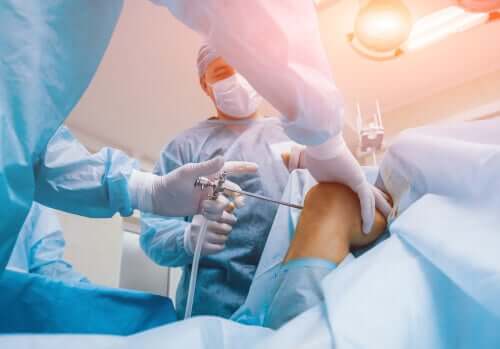 Arthroscopy is a common practice for joint injuries and problems. It’s a practice that has revolutionized medicine, especially in the field of traumatology. It’s a quick surgical process that allows the diagnosis of numerous injuries affecting the joints.

In fact, it’s not only used for diagnosis, doctors also use it to treat certain health issues. This technique was invented in Japan and was initially reserved for the knee joint.

However, with technological advances, arthroscopy has been improving and today it can be used in almost any joint. For example, it’s used to take biopsies of the knee, repair a shoulder that tends to dislocate constantly, and so on.

Because of its importance and how useful it is, in this article we’ll explain everything you should know about arthroscopy, what it consists of, and when doctors usually perform it in modern medicine.

What does arthroscopy consist of?

Arthroscopy is classified as a surgical technique, since, in order to perform it, the medical professionals must make small incisions around the joint that they’re going to work on. These incisions are necessary in order to place all the instruments that allow visualization of the joint without having to open it completely. For example, forceps and a camera are usually inserted to obtain images of the interior.

In other words, arthroscopy is a minimally invasive surgery. Its main objective is to be able to see inside any joint without the need for open surgery. This makes it possible to greatly reduce surgical complications. This is why arthroscopy is so common for joint injuries and more.

The main advantage of this technique is, first of all, that the patient doesn’t need to be completely anesthetized. The use of a local anesthetic in the affected area is usually sufficient. In addition, recovery is much faster than in conventional surgery.

Similarly, arthroscopy greatly reduces the risk of infections that occur through surgical wounds. Although you may not think so, it allows a better view of the joint due to the use of the camera and lighting.

The arthroscope is the name of the small camera that doctors insert into the area. The procedure is simple, and the first thing is to properly disinfect the area. After this, the doctors anesthetize the patient and they make the pertinent incisions to introduce the necessary material.

You may like to read: The Risks of Post-Operative Bleeding

Although, as we’ve mentioned, its main use is in the knee, doctors use arthroscopy on other joints, such as the shoulder or hip. They often use it just to confirm a diagnosis, but they can also take samples from inside the joint.

Joint biopsies make it possible to differentiate certain diseases that are sometimes difficult to diagnose. For example, rheumatoid arthritis or some types of tumors. In addition, arthroscopy is useful for the treatment of certain pathologies, such as the following:

Do patients need recovery after arthroscopy?

Like any other type of intervention, an arthroscopy requires certain aftercare to avoid complications. However, we emphasize once again, that recovery is much faster than in conventional surgery.

First of all, doctors usually recommend that you apply ice to the area to reduce inflammation. In addition, if  you place any type of bandage or compress over the incision, avoid getting them wet. The doctor will most likely schedule a check-up of the wounds a couple of days later.

On the other hand, they may advise you to take medication for pain and inflammation. Likewise, you’ll probably receive guidelines to rest up! The truth is that it all depends on the specific injury you’ve sustained.

You may like: Muscle Pain and Tension Due to Stress

Arthroscopy is a practice that doctors commonly use for joint injuries and more. It’s a relatively modern technique that allows professionals to see inside the joints. It’s very useful for both the diagnosis and treatment of numerous joint problems.

The Best and Worst Foods for Joints
Following a healthy diet for your joints is essential to prevent or improve some joint diseases. Read on to discover foods for joints! Read more »
Link copied!
Interesting Articles
Treatments
Advantages and Disadvantages of LASIK Surgery