The cell wall is a vital structure for bacteria; if they're not able to synthesize it, they die. To inhibit the synthesis of this structure, ampicillin blocks the last phase of its formation. Learn more in this article! 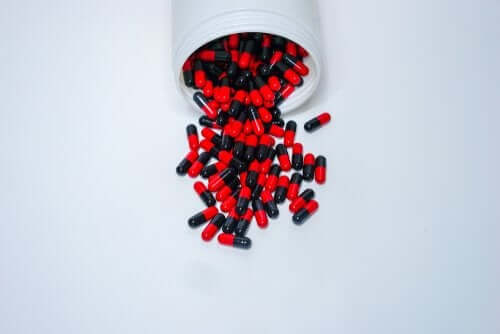 Several factors determine ampicillin dosage. Ampicillin is an antibiotic medication that belongs to the penicillin family. In fact, it’s a β-lactam antibiotic and the first semi-synthetic penicillin that scientists developed. The pharmaceutical laboratory GlaxoSmithKline, or GSK, created it between 1959 and 1961. Since 1961, doctors have used it for the treatment of many infections of bacterial origin.

The development of ampicillin is due in part to the fact that bacteria began to become resistant to normal penicillin. This led scientists to begin researching antibiotics to discover a drug with a greater spectrum than penicillin.

It is, together with amoxicillin, one of the main aminopenicillins available on the market today. Typically, doctors use it to treat infections caused by gram +, gram – and anaerobic microorganisms.

In this article, we’ll learn all about it.

How does Ampicillin affect the body?

Ampicillin is a bactericidal antibiotic that causes the death of the pathogenic microorganisms. This antimicrobial property comes from its ability to inhibit the synthesis of the cell wall in bacteria.

The cell wall is a vital structure for bacteria. If they’re not able to make it, they die. To inhibit the synthesis of this structure, ampicillin blocks the last phase of its formation. Specifically, it binds to proteins known as PBPs or Penicillin-Binding Proteins, which are specific to the bacterial cell wall.

By blocking the synthesis of the wall, ampicillin ultimately causes the death of the bacteria. However, several bacteria have a mechanism of resistance to this type of antibiotic. These bacteria have enzymes called Beta-lactamases, which are capable of breaking the chemical structure of ampicillin. Thus, they render it ineffective.

As we have mentioned, ampicillin, in the right dosage, is used to treat bacterial infections. Specifically, doctors use it to combat the diseases triggered by some of the following bacteria:

Therefore, they use Ampicillin to treat infections that come from microorganisms that are sensitive to this medicine. Overall, some examples are otitis media, sinusitis, and cystitis.

Pharmacokinetics: What happens to Ampicillin in the body?

The study of Pharmacokinetics includes the processes of absorption, distribution, metabolism, and elimination of a drug. Overall, doctors can administer ampicillin dosages in two ways. It can be both orally and parenterally, depending on the needs of the patient.

Oral absorption is approximately 30-55% of the dose. However, keep in mind that if someone takes ampicillin orally after eating, this inhibits absorption. Because of this, you must take the medicine on an empty stomach.

Then, once the body absorbs it, it requires plasma proteins for distribution. However, it only needs a fairly low percentage. Fortunately, it distributes widely. In fact, it’s even able to cross the blood-brain barrier. Therefore, it’s useful in the treatment of meningitis. However, it does not cross the placenta.

Finally, the ampicillin is broken down by the body into molecules that have no reactivity. These molecules are later eliminated, mainly through the urine.

Ampicillin dosage will depend entirely on whether it is administered parenterally or orally. First, for parenteral administration, the recommended doses are:

As for oral administration, doctors typically follow these recommendations:

However, the instructions given by the doctor for each patient and each specific case must be followed. Antibiotics should never be taken without a prescription.

Ampicillin is a medicine that belongs to the penicillin family. Due to the abuse and misuse of these types of medications, they have remarkably lost their effectiveness. Bacteria are becoming increasingly resistant, so it’s very important never to self-medicate: always follow medical recommendations.

Allopurinol for Gout: Side Effects and Indications
Allopurinol is a medication for the treatment of gout and high levels of uric acid in the body. It's for those cases in which gout is due to other drugs. Read more »
Link copied!
Interesting Articles
Medication
Characteristics and Uses of Flumazenil