The most common adverse effects of alprazolam treatments are related to the pharmacological effects of the drug, i.e., central nervous system depression. 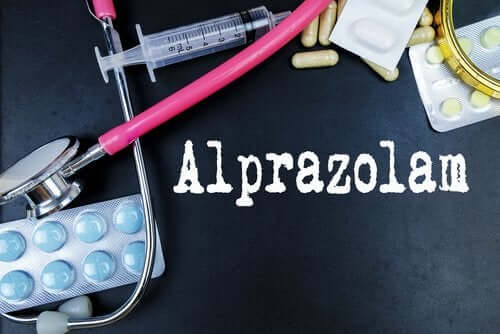 Alprazolam is an anxiolytic drug that belongs to the benzodiazepine family. Specialists often prescribe this drug in the treatment of episodes and attacks related to anxiety.

Although benzodiazepines also have sedative properties, specialists often recommend other drugs that are less likely to cause addiction. However, alprazolam is one of the benzodiazepines that has the least addictive effects.

Before going into detail with the characteristics of the drug and learning how it works in the body, it’s important to know the pathology for which it’s indicated: anxiety.

To begin with, anxiety can be a normal emotion or a psychiatric disorder. Whether it’s one type or another will depend on the intensity and the impact it has on the patient.

In normal situations, it’s a natural component of our mind that acts as a defense mechanism and allows us to adjust to stressful situations.

Nevertheless, there are some limits which differentiate anxiety as a normal emotion from a pathological issue. It becomes an unhealthy condition when the mind annuls or obstructs its adaptation to the stressful situation.

Patients describe anxiety as a feeling of threat, a stressful expectation of the future, and an alteration of the psychosomatic balance in the absence of real danger. People with anxiety often suffer:

On the other hand, alprazolam is also used to treat patients with symptoms of both anxiety and depression.

How it works: what does the drug do in the body?

Benzodiazepines act on the central nervous system (CNS) and can produce all types of effects in it. Among these effects are sedation and hypnosis, as well as relaxation of skeletal muscle and anticonvulsant activity.

Recent evidence indicates that benzodiazepines owe their effect to the ability to bind gamma-aminobutyric acid to the GABA receptor complex. GABA is an inhibitory neurotransmitter that exerts its effects on the specific receptor subtypes called GABA-A and GABA-B.

Now, what is a neurotransmitter? GABA, like other substances such as serotonin or adrenaline, are chemical substances which are synthesized in the body and which are responsible for transmitting signals from one neuron to the next.

Depending on the neurotransmitter, they’ll transmit one type of signal or others triggering a different signaling match. In the case of GABA, when secreted, it emits signals of inhibition or reduction of neuronal activity.

GABA plays an important role in behavior, cognition, and the body’s response to stress. Therefore, specialists associate low levels of this neurotransmitter with anxiety disorders, among others. Hence the effectiveness of benzodiazepines in these issues.

Pharmacokinetics: What happens to alprazolam in the body?

Pharmacokinetics is the set of different processes and changes that the drug undergoes in the body. It includes the following processes: absorption, distribution, metabolism, and excretion.

Alprazolam is administered orally and is rapidly absorbed. Maximum concentrations in the blood are reached within one to two hours after administration.

The body metabolizes this drug. In other words, it undergoes a series of chemical reactions to become more soluble and to promote its excretion, mainly in the liver. Therefore, patients with liver problems should be very careful about taking this drug.

Once it has been metabolized, both the unmodified drug and the substances resulting from the process, called metabolites, are eliminated mainly via urine.

You may be interested in: Digestive Problems Cause by Anxiety

The most common adverse effects of treatment with benzodiazepine are related to its pharmacological effects. In other words, with its effect on the central nervous system.

However, most patients suffer from anxiety and the effects of anxiety and depression, as alprazolam is a common treatment for these issues. In those cases, some of the most common adverse effects are the following:

However, these effects occur in only 1% of cases. There are other even less frequent effects such as:

In conclusion, alprazolam is an anxiolytic drug to treat anxiety. However, you shouldn’t self-medicate without having the appropriate medical supervision, as misuse of the drug can be harmful to your health. An overdose can even lead to death.

Medications that May Lead to Drowsiness
It's very common to be sleepy during the day but pay attention if you're undergoing treatment. This is because some medications may lead to drowsiness. Read more »
Link copied!
Interesting Articles
Medication
Trastuzumab: Therapy Against HER2 Positive Breast Cancer

Interesting Articles
Other treatments
Description of Speech Therapy and Its Characteristics