Allergic conjunctivitis is a problem that affects approximately 25% of people. It's an excessive inflammatory reaction to exposure to agents such as pollen, mites, smoke, and similar elements. 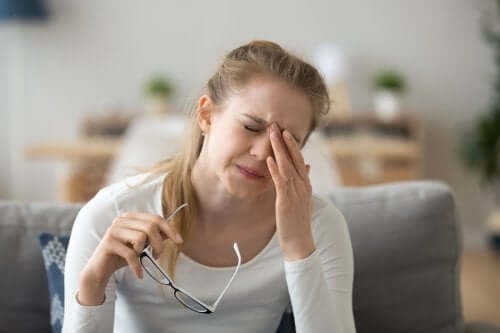 The conjunctiva is the membrane that covers the eyelids and covers the white part of the eye. In this area, there’s a large number of cells belonging to the immune system. When confronted with environmental stimuli (such as pollen, smoke, mites, etc.), these cells release chemicals that cause the inflammation of the conjunctiva, either briefly or for a long time.

It’s believed that about 25% of people have some degree of allergic conjunctivitis. Sometimes the disease occurs alone and sometimes it comes with other illnesses. One of these is rhinitis, as we mentioned above, but it can also be asthmatic bronchitis or eczema.

There are several types of allergic conjunctivitis, depending on the agent that causes it and the course of the disease. The most typical form is that which pollen produces.

Perennial conjunctivitis, on the other hand, is present throughout the year. In this case, the allergens are usually dust, smoke, mites, animal dander, and feathers. There’s another more complex form of conjunctivitis, which is called keratoconjunctivitis.

Most commonly, allergic conjunctivitis affects both eyes. The characteristic symptoms of the disease are the following:

To make a diagnosis, a doctor will take into account the patient’s symptoms and perform an ophthalmological check-up. This consists of an exploration using a slit lamp.

Allergic conjunctivitis is an excessive reaction of the immune system to an environmental factor. When the eyes suffer exposure to a stimulus that produces an allergy, the immune system captures it and triggers a series of reactions, which together form an inflammatory response.

Some cells, such as eosinophils, mast cells, and others, are activated. In doing so, they release substances such as histamine and IgE. These generate the typical symptoms of conjunctivitis, such as itching, redness, inflammation, etc.

There are additional agents, such as viruses, nervousness, spicy foods, light, and others, which often lead to an exacerbation of the symptoms. Such elements are harmless if the conjunctiva isn’t already inflamed.

Read also: Herpes Keratitis, What Is It?

When a person already has allergic conjunctivitis, it’s important to take steps to reduce exposure to the allergy trigger and provide basic care to alleviate symptoms. It best to clean the eyes with saline solution or pH-neutral soaps.

You should also avoid rubbing your eyes and apply cold compresses to reduce the itching. Your doctor may prescribe certain drugs such as antihistamines, nonsteroidal anti-inflammatory drugs, topical corticosteroids, or artificial tears.

All of these measures will simply help you cope with your symptoms. However, the best treatment for allergic conjunctivitis is prevention. The first thing you need to do is to identify the allergen, through appropriate medical testing.

In any case, the best thing to do is to keep your home clean, use synthetic textile bedding, and avoid pets, carpets, and stuffed animals. During a crisis, you should avoid wearing contact lenses.

Conjunctivitis in Children: What to Do
Conjunctivitis in children can have various causes: Bacteria, viruses, allergic processes, and foreign bodies entering the eye. Read more »
Link copied!
Interesting Articles
Illnesses
Can Celiac Disease Cause Infertility?