All About the Different Types of Alopecia

Androgenetic alopecia is the most common cause of baldness in the general population. Still, there are other types of hair loss with different underlying reasons. Learn more with us! 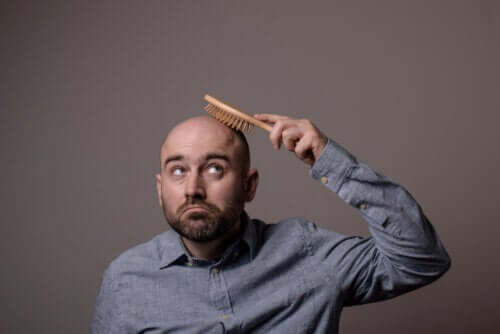 Alopecia refers to abnormal hair loss. Contrary to popular belief, there isn’t just one type of this condition. In fact, there are several. We’ll look at the different types of alopecia in this article.

According to scientific studies, this pathology is divided into classes according to its speed of presentation, antecedents, accompanying diseases, and clinical criteria, such as its extension, the hair’s characteristics, and the level of involvement of the underlying skin.

Furthermore, several bibliographical articles stipulate that androgenetic alopecia (the most common variant) affects 6 to 12 percent of women between 20 and 30 years old and 55 percent of men over 70 years of age.

As you can see, it’s highly prevalent. Additionally, it can come with other underlying diseases. For that reason, it’s necessary to learn about the types of alopecia in order to be able to treat them all.

When it comes to the different types of alopecia, there’s a broad variety. For that reason, it’s almost impossible to speak of general patterns and symptoms. Its extension is worldwide. However, it does have some peculiarities regarding race and geographical distribution.

Alopecia is defined as the loss of hair of any type and anywhere on the skin’s surface. To facilitate their diagnostic algorithm, clinical hospitals divide this pathology into two large groups:

All the variants that we’ll be talking about next have one common characteristic. Basically, the hair loss isn’t caused by the appearance of fibrous tissue that cancels the follicle. In these cases, there isn’t a destruction of the hair follicle, however, it does present various changes.

Androgenetic alopecia is the most common variant of this condition. In fact, various studies report that it covers about 95% of cases. As we said before, up to 55% of men suffer from it, while the percentage in women is around 10%.

Dermatological magazines report that there are two main causes of this disease:

There are multiple treatments to alleviate androgenetic alopecia, such as the use of minoxidil, melatonin, finasteride, or laser therapy. Some of these drugs keep the hair from falling out so you can say they’re effective up to 90%, which is pretty great. On the other hand, it’s pretty difficult to make the hair follicle regrow.

Research shows that this type of alopecia, characterized by the appearance of round patches in focal areas, is a very little known pathology. Experts believe that various factors condition its appearance:

Other types of non-scarring alopecia

We’ve described the two most important types of non-scarring alopecia. There are many more, but we’re going to limit ourselves to commenting on them briefly.

According to scientific articles, the main characteristic of scarring alopecia is permanent hair loss, which is replaced by fibrosis or hyalinized collagen. This type of pathology accounts for 3% of the alopecia observed in dermatological centers. For that reason, its clinical importance is relatively low.

Here are some of the factors that can promote this type of baldness:

What you should remember about the different types of alopecia

As you can see, there are two divisions of alopecia: non-scarring and scarring. There are different types of non-scarring alopecia depending on the focus of hair loss and the underlying reasons. However, they’re usually conditioned by genetic and hormonal factors. On the other hand, scarring alopecia is due to trauma and wounds that generate scarring in the place of the hair follicle.

There’s something we must make clear here. Androgenetic alopecia is the most common variant of this disease, which mainly affects middle-aged men. Fortunately, there are many treatment options to alleviate it and stop hair loss.

How to Fight Alopecia With Natural Solutions
Alopecia can affect both men and women due to different causes. Read on to discover some natural solutions to fight hair loss! Read more »
Link copied!
Interesting Articles
Beauty
How to Make Lye-Free Aloe Vera Soap

Beauty
What's Micellar Solution and What's It For?

Micellar solution has gained quite a bit of importance in skincare routines in recent times. Its use as a facial…

Beauty
Tips for Removing Pimples Near the Pubic Area

The inguinal region and the pubic area, because of its location and anatomical peculiarities, is very prone to the appearance…

Beauty
Skin Aging: Why Does it Happen?

Skin aging is something that often alarms many. After all, who wouldn't want to keep their skin smooth and young…

Beauty
Microblading Your Eyebrows: Before and After

Nowadays, we've been discovering more and more aesthetic techniques to beautify the face and to touch-up the areas we'd like…