All About Rifampicin and Tuberculosis

Rifampicin is an effective antibiotic thanks to its ability to inhibit RNA synthesis in bacterial cells. It does this by inhibiting the action of RNA polymerase, an enzyme that depends on DNA. Learn more in this article! 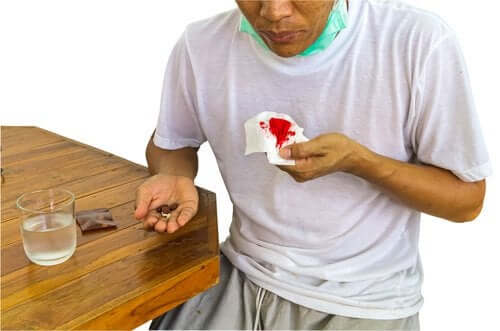 Rifampicin is an antibiotic medication in the rifampicin family. It is a semi-synthetic compound and the first-choice treatment for tuberculosis. Stay with us and find out all about the link between rifampicin and tuberculosis.

However, this medication shouldn’t be used as monotherapy: in other words, rifampicin shouldn’t be the only medication that a patient receives to treat tuberculosis. This would favor the development of antibiotic-resistant bacteria. Therefore, doctors administer this medication along with other medications. Keep reading to find out more about this treatment!

Rifampicin also has other indications, such as the treatment of patients who carry Neisseria meningitides bacteria but don’t have symptoms. In addition, rifampicin is effective in the prophylactic treatment of Haemophilus influenzae type B and for the treatment of leprosy, among other things.

The history of rifampicin

This antibiotic first appeared on the market in the 1960s. Scientists first obtained rifampin B, a metabolite of rifampin. They then tried to make a series of structural modifications to the molecule in order to increase its antibiotic potency while simultaneously decreasing rapid elimination by bile. In the end, they were able to synthesize rifampicin.

Since its introduction to the market, rifampicin has been considered the first-line treatment for tuberculosis. However, bacteria became resistant to rifampin and this forced doctors to administer other medications along with it, such as isoniazid and also ethambutol.

However, the discovery of rifampin was undoubtedly a breakthrough in the medical field. Learn more about this drug in the article below!

Tuberculosis is a disease that originates from a bacterial infection, specifically the bacteria Mycobacterium tuberculosis. In most cases, this microorganism affects the lungs.

Additionally, infected people can spread the disease through the air when they sneeze or cough, for example. Unfortunately, breathing in the expelled particles is enough to become infected.

However, tuberculosis is a preventable disease and today doctors can cure most patients. Specifically, since the year 2000, more than 49 million patients have been cured thanks to modern medicine’s diagnosis and treatments.

As for the signs and symptoms of this disease, it depends on what area the bacteria multiply in. Normally, as mentioned before, tuberculosis usually affects the lungs and causes the following symptoms:

How does rifampicin exert its effect on the body?

Rifampicin owes its antibiotic effect to its ability to inhibit RNA synthesis of bacterial cells. To do this, it inhibits the action of RNA polymerase, a DNA-dependent enzyme. Rifampicin doesn’t bind to the polymerases of eukaryotic cells, such as those of humans, so it doesn’t affect the synthesis of human RNA.

What is the appropriate dose?

As for children, the dose for HIV negative is reduced to 10-20 mg/kg per day, whereas the maximum dose is 600 mg. However, it’s always combined with another antituberculous agent. If the child has HIV, the dose will be the same.

Patients take the medicine once a day for two months along with another antituberculous drug. Afterward, the patient must take isoniazid and rifampin at the same dose once a day or 2 or 3 times a week for the next 4 months.

Rifampicin is an antibiotic used in the first line of tuberculosis treatment, always in combination with other medications. The combination became necessary due to the resistance that bacteria developed against the medication by itself.

You can ask your doctor or pharmacist any questions you have about this medicine. You should always follow the instructions that your professional healthcare providers give you. Misuse of medications can lead to serious health problems.

How to Know if You Have a Vitamin B12 deficiency
Vitamin B12 is one of the most important vitamins for the body. Proper levels of the vitamin help to maintain a good metabolism, cellular function and mood. Read more »
Link copied!
Interesting Articles
Medication
What Is Valproic Acid Used For?

Interesting Articles
Babies
Why Do Babies Drool So Much?