The best way to prevent mumps is undoubtedly the MMR vaccine. This vaccine combines doses to prevent measles, mumps, and rubella. In this article, learn all about mumps. 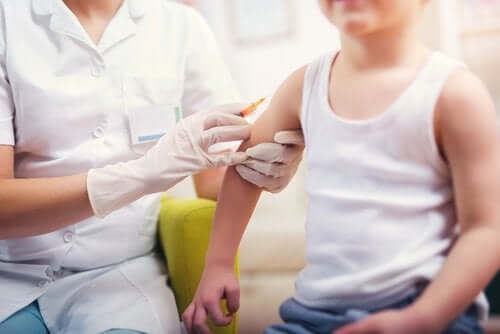 Mumps, or parotitis, is a contagious disease that can either be acute or chronic. It either affects one or both parotid glands, responsible for producing saliva. These glands are located behind the ascending branches of the jaw.

In this interesting article, learn all about mumps. A virus of the genus Paramyxoviridae causes this disease. Although it’s usually common in children and teens, it can also infect sensitive adults.

In addition, mumps can affect other glands in the body, the nervous system, and the testicles.

Before the universal vaccine, mumps was an endemic disease around the world. It affected most children between the ages of two and 15.

Since the vaccine was invented, the incidence dropped sharply. In fact, now there are only occasional outbreaks in Latin America. When it comes to how mumps are contracted, it occurs between two days before the parotids become inflamed and up to seven to nine days after.

As it’s a respiratory virus, transmission occurs through droplets that an infected person releases when they sneeze, cough, or talk.

All about mumps: the symptoms it causes

Some people infected with the mumps virus have very mild or no signs or symptoms. When signs and symptoms do occur, they generally appear approximately two to three weeks after exposure to the virus.

The main symptom of mumps is inflammation of the salivary glands that makes the person’s cheeks swell. In addition to this characteristic swelling, patients may also suffer:

Mumps rarely causes complications. Nevertheless, here are some of the possible ones:

Although they aren’t very common, they can be potentially serious. Most involve inflammation of some body part.

Apart from the salivary glands, about a third of men with mumps also develop inflammation of one or both testicles. This complication is known as orchitis. Although this complication could cause sterility, it’s usually rare.

Read on to learn more: How Can We Prevent the Spread of Viruses?

Another complication that mumps could cause in girls and women is inflammation of the ovaries, although it’s usually less frequent.

On the other hand, on rare occasions, the central nervous system can also become inflamed. This can lead to meningitis or encephalitis, if the brain is damaged.

All about mumps: how to prevent the disease

The best way to prevent mumps is, undoubtedly, the MMR vaccine. This vaccine prevents measles, mumps, and rubella. It provides both individual and collective protection.

The MMR vaccine is part of children’s vaccination schedule. Children receive two doses, one at 12 months and another at age three. At this point, you should remember that vaccines aren’t 100% effective. Hence, some isolated cases can occur.

In fact, it’s worth mentioning that there was a mumps outbreak in 2019 because, although the vaccine is 95% effective, there was a problem with certain doses of MMR.

As it’s a viral infection, the treatment focuses on reducing the symptoms. Thus, it’s said that the treatment is symptomatic. It’s based on the administration of NSAIDs (non-steroidal anti-inflammatory drugs), in addition to rest.

Medical professionals don’t prescribe antibiotics for this condition, as they’re only effective against bacterial infections, not viral ones. Once an outbreak appears, it’s advisable to review each case and re-vaccinate if there are any doubts.

You may also want to read: The Reproductive Cycle of Viruses

On the other hand, diet is another important factor to take into account. The patient’s capacity to eat will depend on their condition. Thus, many resort to soft diets. However, if the patient can eat, they don’t need to restrict their diet.

Why Viruses are Getting Stronger
Viruses are getting stronger over time. When they no longer can affect the body, they mutate to be able to attack and affect humans. Read more »
Link copied!
Interesting Articles
Illnesses
Characteristics of Henoch-Schönlein Purpura Disorder