All About Male Birth Control Methods

The surgical procedure of vasectomy aims at blocking the vas deferens through various techniques such as sectioning, ligation or compression, among others. Read today's article to discover more about male birth control methods. 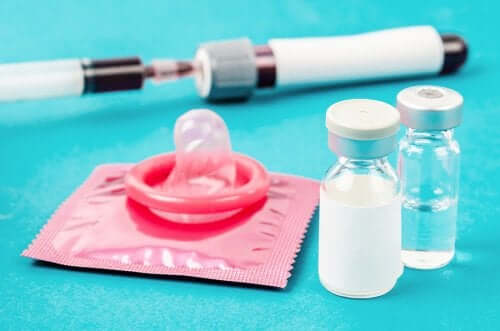 Today, research into male birth control methods has expanded to include some that possess mechanisms similar to those of female anovulatory methods.

As many know, there are fewer contraceptive options available to men than to women. Throughout the following article we’ll explain both the alternatives available and those that are under study. Discover them!

Research that appeared in Fertility and Sterility recognizes that more and more men are willing to take active responsibility for family planning. Because of this, there has been increased interest in learning about different male contraceptive methods.

The same publication highlights that the most common are condoms and vasectomy. However, they’re not the right choice for all men. For this reason, studies on the subject are still in progress. Below, we’ll see everything in detail.


The condom is still at the top of the list among contraceptive methods for men. In addition to preventing pregnancy, it also prevents STDs.

Condom use is one of the most widely used methods of male contraception in today’s society. Condoms and spermicides work together to help protect against pregnancy. Men simply need to place one on their penis, which will keep sperm inside the condom so that it can’t reach the woman’s egg.

As for spermicides, they cover the woman’s cervix and kill the man’s sperm. These products are available in several forms:

Condoms can be made of latex or resistant plastic. Although, in general, women use spermicides at the same time as men use condoms, there are also condoms that already have spermicide inside.

This way, if the condom breaks or gets a hole in it, the spermicide will help kill the sperm. In addition, condom use helps prevent sexually transmitted infections. However, using spermicide alone doesn’t prevent these types of infections, so it is essential to use a condom as well.

2. Vasectomy, one of the methods of contraception for men

Surgical contraception or voluntary sterilization has become a very popular method, mainly in developed countries. This contraceptive method has the highest rates of effectiveness and is a popular resource for those couples who don’t wish to have any more children.

It has an advantage over other male birth control methods in that it requires one simple and permanent intervention. What’s more, it doesn’t require specific controls afterwards. In addition, as long as surgeons perform the procedure according to accepted medical standards, the risk of complications is small.

Read also: Do You Suffer from Retrograde Ejaculation?

What does this male birth control method consist of?

The surgical procedure for vasectomy aims to block the vas deferens by means of various techniques. These include cutting, tying, or sealing, among others.

It’s a simple technique that doctors can perform on an outpatient basis. And, when patients are under local anesthesia during the procedure and with adequate asepsis, it carries little risk of morbidity and an insignificant risk of mortality.

It consists of interrupting the continuity of the vas deferens, once surgeons have identified it after the scalpel incision of the scrotum. Then, as we mentioned above, there are different techniques to achieve its occlusion or blockage.

The male birth control method was is designed in an attempt to offer low-cost solutions ignored by the pharmaceutical industry. Its commercial name is Vasalgel and research is still underway.

The application of this treatment involves injecting a gel into the duct through which the sperm passes, just at the end where it attaches to the scrotum.

The procedure takes only about 15 minutes and, once complete, the gel attaches and continues as a filter. Therefore, it allows fluid to pass but not sperm. Therefore, it doesn’t prevent ejaculation or orgasm.

In addition, these injections are just as effective as the previous technique, vasectomy. And, since it’s not a hormonal method, Vasalgel doesn’t have the side effects that hormonal treatments usually have for women. Birth control pills can cause migraines, weight changes, and decreased libido.

Find out: The Side Effects of Birth Control

This is another male birth control method that researchers are working on. A new study recently presented in Chicago has shown that a male birth control pill is possible. Even more research is needed, but it seems that men will also be able to use this type of method to avoid pregnancy.

Researchers found that the proposed hormone pill, called dimethandrolone undecanoate, effectively reduced testosterone and other hormone levels responsible for sperm production without other side effects.

Despite the fact that more methods of contraception for men are being studied, today we don’t have any that are as effective as the female contraceptive pill can be. The use of condoms is recommended whenever you want to avoid pregnancy as well as to prevent sexually transmitted diseases. Also, in case of doubt, it’s best to visit a professional in sexual and reproductive health.