All About Curling, a Winter Sport

Curling is a very simple but nonetheless challenging winter sport. Keep reading to learn all about curling, including its history and practice! 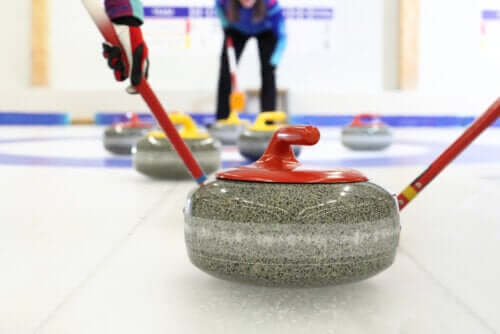 Along with skiing, ice skating, and snowboarding, curling is a winter sport. You can also practice this sport on artificial tracks designed for it.

It requires little strength and some skill, as well as a lot of team spirit, precision, and strategy. This is one of the reasons why it’s sometimes called “chess on ice”.

Doing any type of physical activity during the winter is beneficial, since the body burns more calories. After all, people tend to be sedentary during this season of the year.

Some information on the history of curling

There’s no agreement on the origins of the name “curling”. The name of the sport could be related to the verb “curl”. It was also called the “roaring game”. Most sources agree that it emerged in Scotland.

Although there’s no exact date of invention, experts believe that it emerged in the 16th century. In this regard, experts have found many historical artifacts about this sport. For example, experts found a curling stone engraved with the date 1511.

This sport was first mentioned in a 1540 document, some annotations in Latin by John McQuhin. Paintings by Flemish painter Pieter Brueghel the Elder depict scenes of a similar sport.

People used to play this sport in a frozen pond or lake. In 1716, the first track was built, at the Kilsyth Curling Club in Scotland. The size and weight of the stones ranged from four to 22 pounds.

Curling arrived in America in 1807, from the hand of Scottish emigrants who founded the Royal Montreal Curling Club in this Canadian city. In the 20th century, it became an Olympic sport.

Make sure you read: 5 Sports That Offer Multiple Health Benefits

All about curling: gameplay

Curling is a team sport that you can practice on a fairly narrow rectangular ice rink. It’s about 145 feet long by 15 feet wide.

Two teams of four players play each other. Each player throws two stones per round (meaning that eight stones are thrown per round). They can use brooms or brushes to modify the trajectory of the stones.

The principle is similar to that of bowling since the goal is to slide the stones as close as possible to the “house”, which is at the other end of the rink.

The players of each team throw in order, alternating with those of the other side. To achieve their goal, players can make different types of throws:

The stones that are closest to the center are counted. But if the one that follows after the center is from the other team, only one point will be scored.

The game is played in a specified number of rounds or ends. A match can have eight to 10. The team with the most points wins. But if the teams are tied at the end, an additional match must be played.

Currently, there’s a time limit for throwing. Each team has up to 60 minutes to do it.

This article may also interest you: The Differences between a Coach and a Sports Psychologist

All about curling: The teams

In curling, each team consists of four players. Each player has their own specific role:

This is the player who throws in the first turn. In other words, they throw the first and second stones. For this reason, we can say that their throw is the easiest, as there are no other stones to worry about. But their role is very important, as the place where the stones land will determine the rest of the game.

Once the lead finishes their throws, they must help their teammates, sweeping with the broom to facilitate sliding.

As the name implies, this player throws the second pair of stones. As such, they throw the third and fourth stones. After they finish, they also sweep or help sweep the throws of the teammates who follow.

In addition to throwing the fifth and sixth stones and sweeping the first player, they mark the plays and help design the strategy.

This player is like the vice-captain of the team. In fact, when it’s time for the skip to throw, the vice-skip performs the functions of the captain, guiding those who sweep.

This is the captain and most important player. In general, they’re usually the most experienced. They define the strategy with the team in the ends, indicating the play and the sweeps.

Since they have to throw the last two stones, they have the most difficult task. This is because the sheet is full and they must be very careful.

All about curling: Equipment

In addition to stones and brooms, other equipment is used:

There are no official rules or indications regarding the sliders each player must use. Only championships require certain uniformity.

Above all things, curling is a strategy game. In fact, some studies analyze decision-making as an important factor in this sport.

There’s no age limit or condition. It’s a sport that anyone can enjoy, as it provides both physical and psychological benefits.

Curling is contraindicated in some cases. For example, if you have acute low back pain, bending down to slide the stones could worsen your condition.

Finally, according to several studies, people with asthma and allergy sufferers should be careful when playing winter sports, as it may constitute a greater risk for them.

5 Sports That Offer Multiple Health Benefits
Doing sports is very important, and some kinds of sports in particular offer multiple health benefits such as toning your body. Read more »
Link copied!
Interesting Articles
Exercise and sports
Here's How to Find Time to Exercise

Exercise and sports
Sprinting Exercises to Improve Your Running Speed

Sprinting exercises are an indisputable option for a high degree of intensity and comprehensive toning, through short periods of activity.…